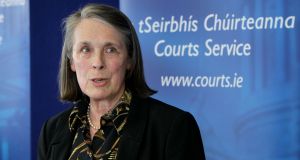 Long-awaited procedures to deal with the behaviour and ethics of judges may not become operational for another nine months, according to the Department of Justice.

While the Judicial Council has been operational since December 2019, the parts of the legislation that give the council powers to hold disciplinary hearings, or receive complaints against a judge, have yet to commence.

The absence of any such legal provision was the reason why a non-statutory review was conducted on the controversy arising from Mr Justice Séamus Woulfe’s attendance at the Oireachtas Golf Society dinner in Co Galway in August.

A judicial conduct committee was established by the council on June 30th last. Under the provisions of the Judicial Council Act, it now has a maximum of 12 months to produce guidelines concerning judicial conduct and ethics.

The outer limit for the submission is June 20th, 2021 and the guidelines then need to be adopted by the Judicial Council. Once that happens, Minister for Justice Helen McEntee will make “orders without delay” bringing into operation those disciplinary provisions.

The department said there was nothing to preclude the guidelines from being completed earlier than the end of June next year. “The Minister would like these guidelines completed as soon as possible,” said a spokesman.

The lack of a statutory mechanism to deal with judicial conduct first came to public prominence in 1998 following the involvement of then Supreme Court judge Hugh O’Flaherty in re-listing a case.

However, it took more than 20 years for the long-promised Judicial Council to be established.

Once the Act is fully operational, any complaint against a judge can be investigated by the council on a statutory basis, and any appropriate action taken.

In her report on Mr Woulfe’s attendance at the dinner, former chief justice Susan Denham came to the conclusion that requesting the resignation of the judge would be “unjust and appropriate”.

However, the report also said it had not been advisable for him to attend the golfing outing and the dinner in Clifden, nor had he been “sufficiently vigilant” in going to such an event, at the time of the coronavirus pandemic.

Her report is now the subject of an informal resolution involving Chief Justice Frank Clarke. A meeting between Mr Justice Clarke and Mr Justice Woulfe which had been rescheduled for last Friday has been postponed again on medical grounds. Mr Justice Clarke has emphasised the urgency of resolving the issue.

Mr Justice Woulfe has been the recipient of further criticism in recent weeks following the release of the transcript of his interview for the Denham report where he complained about being vilified in the media.

Labour justice spokesman Brendan Howlin said everybody in politics had to be very careful to keep a clear dividing with the judiciary under the separation of powers.

However, he said politicians of successive governments had been “very tardy in not putting into place a mechanism for judicial accountability”.

“The pace of it was very slow. We now have the legislative framework. It’s now a matter for the judges to set their own standards and make sure it is very high.”

Mr Howlin added that “some people will be somewhat disquieted by the transcript” in which Mr Justice Woulfe complained of “hysteria”. The judge said he also felt sorry for the organisers of the event who “had been pilloried” as though it was “like a Ku Klux Klan”.

Social Democrats co-leader Catherine Murphy said she was “surprised” by the content of the transcripts and was surprised Mr Justice Woulfe was unaware of developments in the State’s response to Covid-19 in the week of the dinner.

“I do not think from reading the transcripts that he actually understands what the outcry was about,” she said last week. “If you do not understand that, it then makes it very difficult to relay decisions.

“The public was angry for very good reasons. They had spent months not being able to go to funerals and then they say different standards apply to people in prominent positions in Irish life. That, to me, was a very obvious reason.”