FF TD raised details of the incident at a PAC meeting, without the nurse’s knowledge 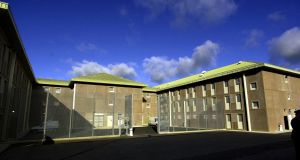 The woman was employed by an outside agency and assigned to work at the Midlands Prison when a prisoner attacked her in November 2018. Photograph: Bryan O’Brien

A prison nurse was told she was no longer permitted to work in the Irish Prison Service (IPS) hours after her complaint of workplace sexual assault was raised in the Oireachtas.

The woman, who has requested anonymity, was employed by an outside agency and assigned to work at the Midlands Prison when a prisoner attacked her in November 2018.

Three months later, without the nurse’s knowledge, details of the incident were briefly raised by Fianna Fáil TD Marc MacSharry at the Public Accounts Committee (PAC) during an appearance by a senior IPS official.

Later that day the nurse was contacted by her agency and told she would no longer be working at any facility in the prison system.

The nurse took a case to the Workplace Relations Commission (WRC) which, in June, found she had been penalised for making a complaint of sexual assault by having her shifts cancelled. It awarded her €65,000, the equivalent of 2½ years’ salary. It is understood the IPS has lodged an appeal.

“I can’t even put into words what all that was like; 2019 was a really tough year for me. It leaves an indelible mark, that this thing was done to you,” the nurse said.

The woman was dispensing medication in the prison on November 27th, 2018 when a prisoner grabbed her breast in an incident which was witnessed by a prison officer.

She made a complaint to the IPS but did not go to the Garda because she was hoping to obtain a permanent post in the prison and did not want to “rock the boat”.

A week later she was rostered to work in the same area where the assault took place, causing her great upset. She called the IPS to raise her concerns but nothing was done and she continued to work on the same wing “under duress”, according to the WRC judgment.

On January 17th, 2019 Mr MacSharry raised the matter at a PAC hearing without naming the nurse. The TD had heard about the incident through another IPS whistleblower. He had not been in contact with the nurse and she was not aware he was going to raise the matter.

“I spoke to a number of whistleblowers and became aware of the alleged sexual assault of an agency nurse who was not provided with due process in dealing with her complaint and forced to return to the same working environment immediately after, denying her standard due process and assistance which one would expect on this case,” Mr MacSharry told this newspaper.

“I raised the matter with prison service management [who] said they were unaware of it and I asked that they contact the various agencies which provided nurses to the service and inquire if and who had experienced an alleged sexual assault while carrying out her work within the prison.”

Later the same day the nurse was told by the agency she would not receive any more shifts with the IPS.

The WRC noted the nurse had worked with the IPS since April 2018 without the required courses but that her shifts were not cancelled until her assault was raised at the PAC.

The director of the nursing agency which employed her also gave evidence it was not unusual for courses to be out of date.

WRC adjudication officer Marguerite Buckley SC said she was satisfied the comments at the PAC hearing were linked to the cancellation of the nurse’s shifts and that the woman was “penalised” for making a complaint.

Ms Buckley also criticised how the IPS dealt with the sexual assault. “I understand that the workplace in which she worked could be highly charged, but I find the response from the respondent to her assault and reporting of it seriously lacking.

“I note that the complainant continued to work in the same area after the assault under duress.”

Speaking to The Irish Times, the nurse said she lived in a small community with other IPS employees and she worried about rumours spreading that she had been fired for misconduct, such as bringing drugs into prison. “It was really isolating.”

She said the WRC decision supporting her version of events provided only limited comfort. “I had a couple of minutes’ vindication and then it was like this still happened to me.

“Nothing was done about it. I was put at risk. There could be other people put at risk. It kind of outweighed the feeling of vindication.”

The prison system, she said, was “a really vicious environment and I’m not talking about the people imprisoned there”.

An IPS spokesman said “it does not comment on ongoing legal cases”.