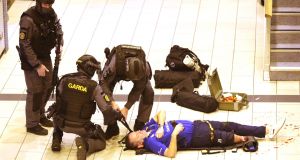 A high profile, real-time simulated terrorist attack resulting in multiple civilian casualties, was dealt with Friday night by heavily armed members of the Garda Síochána, working in concert with other first responder agencies, during an exercise at Dublin City University.

In Operation Barracuda – saving saveable lives, the first such exercise of its type, the Garda Armed Support Unit, Emergency Response Unit and hostage negotiators descended on the Collins Avenue in north Dublin, followed speedily by fire and ambulance personnel.

Everyone involved knew they were participating in an exercise but none of them knew precisely what to expect and had to react according to their training, thereby testing their own skills as well as inter-agency operating procedures.

The exercise lasted a few seconds short of 50 minutes. It began when a white Volvo estate car, with one headlight broken, veered off Collins Avenue and into the DCU campus.

It ended with a blizzard of flashing red and blue lights on multiple police, army, fire and ambulance vehicles clogging the entrance to the campus, strewn with mock dead bodies and Garda and HSE observers making initial assessments as to the performance of their various staff.

The scenario envisaged in the simulated attack drew on the experiences of the 1999 Columbine High School shooting in Colorado, the Sandy Hook School shooting of 2012 in Connecticut, and the Betaclan and related terrorist attacks in Paris in 2015.

Among those observing the DCU exercise was Deputy Commissioner John Twomey who noted that in real life situations such as envisaged in the simulation, events changed by the second and learning by training was essential.

“It is intended to test the ability and interoperability of the emergency services that will come together in the event of a major emergency,” he said.

When the Volvo flew into DCU, smoke belching from its rear from make believe screeching tyres, it sped towards the small roundabout outside the nursing building. As it went, it simulated crashing into two pedestrians, then another in the middle of the road, and several more standing about at the edge of the road.

The pedestrians and other bystanders in the exercise were from among 50 Garda trainees.

The car then reversed into the campus car park where it was parked, primed with explosives. Three “terrorists” primed the explosives before exiting the vehicle. The pedestrians run down were screaming, writhing on the ground and calling for help, urging others to call the guards and ambulances.

First gardaí on the scene after about four minutes were uniform gardaí in a Ballymum/Santry patrol car. Fire and ambulances arrived shortly after and, seven minutes after the start, the first of two Garda Armed Support Units, followed rapidly by armed Emergency Response Units.

The scenario had the terrorists roam the campus shooting “students” at will. One terrorist, a “brother” of one of the others, was shot dead outside the college’s Lonsdale Building.

Two others, however, got inside. They roamed the building’s long central corridor, kicking in doors to side rooms and shooting people at will.

They eventually entered one room where they took “hostages”. A stand-off ensued with about a dozen members of the Emergency Response Unit covering the door to the room while a badly wounded woman writhed on a blood smeared floor, pleading for help but just out of safe reach.

Extreme noise – screaming and banging – blared from a loudspeaker, and a phone rang incessantly, as the heavily-armed gardaí worked out how to proceed with least loss of life.

With the help of a mobile camera, armoured shields and a motorised armoured shield, the woman was dragged to safety on a blanket-style evacuation stretcher. She was whisked down the corridor where, minutes earlier, other “wounded” were evacuated similarly.

After a while, a “hostage” opened a crack in the door and said the terrorists were dousing themselves in petrol – the trigger for the ERU team to storm the room and kill the two.

As members of the Defence Forces Explosives Ordnance Disposal unit dealt with the booby-trapped Volvo, ambulances ferried the “wounded” to hospital and the exercise was wound down.

“Exercises are there to learn,” said one of the main organisers, Detective Sergeant Donal O’Driscoll of the Garda’s Special Tactical and Operational Command.

“If you don’t have issues [with how things went] you’ve nothing to learn.”

The exercise was the culmination of 18 months training, starting with desk top scenarios and building gradually to the sort of large scale, high profile, inter-agency joint exercise staged with the help of DCU.

Despite there never having been an event in Ireland comparable to the terrorist outrages in Europe, or mass shootings in the US, the gardaí feel they have a high degree of experience. Last year, for instance, there were over 50 of what are termed barricade incidents, not dissimilar to terrorist hostage scenarios.

All were dealt with by the gardaí. Friday night’s exercise was in large measure to apply what Det Sgt O’Driscoll said were the Hertford Consensus principles of intervening in mass casualty terrorists attacks to end them rapidly and in a way that also sees wounded evacuated – hence, the saving saveable lives tagline.

The exercise will be the subject of intense reviews in the coming days and weeks, with all participants sharing their own performance assessments and their observations as to how co-operation can be improved.