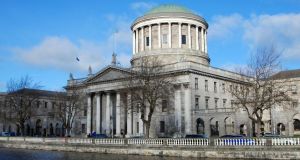 The Four Courts in Dublin. Last month, High Court judge Ms Justice Aileen Donnelly again sought clarification from the Court of Justice of the European Union on the legality of European arrest warrants.

The number of criminal suspects sent from the Republic to other European Union member states under European arrest warrants has fallen markedly, new figures show.

However, the number of suspects being sought by, and surrendered to, the Republic from other EU states remains close to all-time high levels.

In the Republic, only in one in four European arrest warrant requests from Poland last year resulted in the surrender of the person at the centre of the request. Previously the rate of surrendering suspects to Poland was more than 80 per cent.

The new trends emerged in a Department of Justice report about the Republic’s use of the European warrant to be released this morning.

It reveals that surrenders of suspects by the Republic to other EU members states were executed in 73 cases last year. That compares with 177 surrenders in 2011, the highest number on record since the European arrest warrant was introduced in 2004.

Last year’s number of surrenders is the lowest since 2009 when the new system was still being bedded in across the EU.

Surrenders were made to the Republic in 47 cases last year, the third-highest number since 2004.

Data for most, though not all, EU member states combined reveals 16,144 requests for surrender were made under the European arrest warrant in 2015, the highest ever number. No figure for last year was available.

A request to the department for comment on the declining number of surrenders by the Republic to Poland and other EU member states went unanswered last night.

However, the decline in the numbers being sent to Poland for trial comes amid concerns across the EU that legislative changes there in recent years have significantly undermined the Polish legal system.

Poland’s overhaul of its judiciary, along with other sweeping reforms of its courts introduced by a right-wing government over the past two years, have put it at odds with the EU. This has included the forced retirement of selected judges.

Aside from concerns about Poland, the Irish courts have also expressed concern about surrendering suspects to some other EU member states.

Just last month High Court judge Ms Justice Aileen Donnelly again sought clarification from the Luxembourg-based Court of Justice of the European Union (CJEU) on the legality of the warrants.

Mr Justice Donnelly wanted the CJEU to advise whether the prosecutor general’s office in Lithuania was a competent “issuing judicial authority” to make a request for the surrender of a Lithuanian man that her court was being asked to surrender.

The referral to Luxembourg followed two similar applications from the Irish Supreme Court in June on the same issue. Both have yet to be heard by the court.

Requests can be made for a large number of offences; from homicide to drug trafficking, money laundering, sex crimes and even theft.