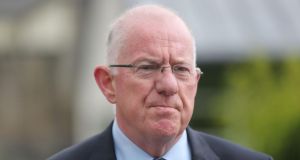 The number of ordinary judges on the Court of Appeal is to be increased from nine to 15 after the Government agreed to bring forward new legislation.

“It is clear that the Court of Appeal has a very significant volume of work, both in terms of the inherited caseload it received from the Supreme Court on establishment of the new court in 2014, as well as the volume of new cases it is receiving.

“I am concerned that with the current waiting times, the Court of Appeal may soon be facing a similar level of delay to that of the Supreme Court prior to 2014, which stood at over four years.

“I am satisfied that there is a strong and compelling case for additional judicial resources in the Court of Appeal, which will address the waiting times for cases to be heard and will improve efficiency in the appellate process.”

The 16th member of the court will be Mr Justice George Birmingham, who sits as president.

The general scheme of the Bill will now be published and submitted to the Joint Oireachtas Committee on Justice and Equality for pre-legislative scrutiny.