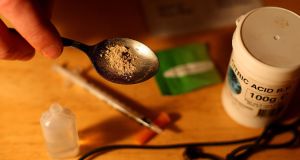 The pilot injection centre scheme will run for a period of up to 18 months with a review after six months. Photograph: Julien Behal/PA Wire

A senior Garda has questioned the rationale behind starting public consultations over a pilot drug injecting centre in Dublin city centre only after the location is selected next month.

The HSE last month issued tender documents for the opening of a Supervised Injecting Facility, and a decision on the provider and location of the €1.5 million service is due in late October.

Speaking at a Joint Policing Committee meeting in Dublin City Council on Tuesday, Assistant Garda Commissioner Pat Leahy was critical of the decision to leave public consultation until after the tender is awarded.

“It [the consultation] probably should, in my own view, have happened in advance of this but it didn’t, so we are going to be faced with a location and then a consultation will start regarding how we are going to manage the environment around that location.

“I probably would have done it differently, but that’s what we’re faced with,” he said.

Minister of State with responsibility for the National Drugs Strategy Catherine Byrne attended the meeting, her first with representatives from the local authority tasked with accommodating the pilot facility, and she defended the sequencing of tendering and consultation.

The pilot scheme was established under legislation in May, and will run for a period of up to 18 months with a review after six months and the possibility of an extension at the finishing date.

The Minister assured councillors that there will be no “honeypot” effect whereby drug users from outside the immediate area are drawn to the facility, and she said there will be no “magic circle” drawn around the centre in which possession of proscribed substances will be legalised.

Chief Supt Leahy added that gardaí will use discretion in stopping and searching for drugs outside the injecting centre, and said there will have to be “reasonable suspicion” for officers to exercise this function, although he did not outline what exactly there must be a suspicion of.

Committee chair and Fianna Fáil councillor Daithí de Róiste said gardaí will be placed in a “terrible” position in having to discern who they should search inside or outside the centre, and remarked that members of the force will be asked to turn a “blind eye” to illegality.

Independent councillor Mannix Flynn said the pilot project is “absolutely wrong” and will give the “all-clear to the Kinahans and Hutches to deal drugs”.

“I believe Minister that you and your Government are going to send more and more people to their deaths,” he said.

Mr Flynn added there will be a guarantee of legal action from businesses around the new facility wherever it is placed, and members of the committee raised concerns over specific mooted locations for the injecting centre including Merchants Quay and Abbey Street.

A number of councillors spoke in defence of the initiative, including former Sinn Féin lord mayor Críona Ní Dhálaigh and the Green Party’s Patrick Costello.

Supporters of the injecting centre say it will provide a safe environment for addicts to use drugs, will curb the number of overdose deaths on city streets and will help to rid areas of public injecting and associated drug litter.