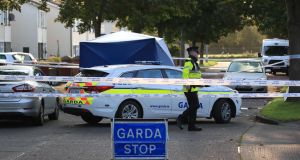 Gardaí at the scene of a fatal shooting on Wheatfields Avenue, Clondalkin. Photograph: Colin Keegan/Collins Dublin 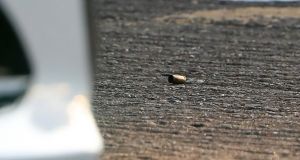 A bullet casing at the scene of a fatal shooting of a man on Wheatfields Avenue, Clondalkin. Photograph: Colin Keegan/Collins Dublin

Gardaí are examining the criminal past of a man shot dead in Dublin last night in an effort to establish a motive for the crime.

He had come to the attention of the Garda in the past. Earlier this year, in February, a young trainee Garda apprehended him after a chase on foot through a west Dublin park.

A firearm was found, and gardaí suspected Nugent had been carrying it and ammunition in a bag.

On that occasion, a man gardai believe was Nugent was driving a vehicle when a Garda patrol began following him.

The suspect then abandoned his car and attempted to make off on foot. He was pursued by three gardaí and apprehended by a young female garda.

She was less than a week out of the Garda College, Templemore, and in the first days of her active service.

Nugent was arrested at the scene as gardaí believed he was the man who had been driving the vehicle that had just been abandoned.

A search of the area - at Collinstown Park, Clondalkin - yielded a hand gun and a loaded magazine. Nugent was taken to Lucan Garda station for questioning and was on bail and facing charges over his alleged crime.

Last night, Nugent was alive when paramedics and gardaí arrived on the scene after people who heard the shooting raised the alarm.

However, it is believed there may have been a short delay in the alarm being raised.

Locals did not initially realise somebody had been shot after they heard what they rightly believed was gunfire.

Despite being treated at the scene for a long time by paramedics who tried to revive him ,Nugent was pronounced dead at the scene.

His remains were left in situ overnight, and the scene was sealed off. A member of the State Pathologist’s office was due at first light today for a preliminary examination of the body where it lay before the remains were taken away for a full postmortem.

That examination was expected to confirm Nugent died as a result of several gunshot wounds.

The shooting, which appears to have pre-planned, occurred at about 9.30pm at Wheatfield Avenue in Neilstown. Mr Nugent had an address at the Moorefield area of Clondalkin. .

The Garda and Dublin Fire Brigade paramedics attended after being notified of the shooting.

A large crowd of local residents were gathered at the scene late last night. A tent had been erected to protect the dead man’s remains from the elements. The scene was also attended by the Garda Armed Response Unit.

A group of young women said they had heard about eight shots, which they initially thought were fireworks.

The Garda issued a short statement about the attack. “Gardaí and emergency services are at the scene of a shooting incident at Wheatfield Avenue, Clondalkin, Dublin,” it said.

“The incident was reported to gardaí at 9.40pm on Monday, 11th September 2017. The area is currently sealed off and a forensic examination of the area will take place.”

The Garda is seeking witnesses to the shooting, though it appeared there was scant detail about details of the shooting, including the number of attackers and mode of escape.

James McClean: ‘The abuse in the last few games has simmered right down’