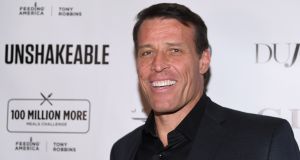 Tony Robbins is accused of sexual misconduct in the Buzzfeed News articles, an allegation he strenuously denies. Photograph: Dave Kotinsky/Getty

US self-help guru Tony Robbins is taking a defamation action in the Irish courts against a London-registered company behind news website Buzzfeed UK over articles published about him.

Mr Robbins is accused of sexual misconduct in the articles, an allegation he strenuously denies.

Mr Tweed defended the decision to take the defamation action against Buzzfeed in the High Court in Dublin, even though the allegations relate to Americans and alleged events in the US, and Buzzfeed’s main audience is in the US.

Buzzfeed said Irish visitors represented just under 0.5 per cent of the news website’s total traffic so far this year.

But Mr Tweed rejected any suggestion that the court action, filed in Dublin on Tuesday, amounted to “libel tourism.”

The Irish courts were “totally appropriate” as the suitable jurisdiction for the action, he said, given that Mr Robbins sells books in Ireland and has speaking engagements here, and that the “main damage” against him has been caused on Twitter, whose European headquarters is based in Dublin.

“The journalists are tweeting the material on Twitter. Twitter have their European headquarters in Dublin. We will be taking action against Twitter if they do not move to take down the offending tweets,” he said.

“The articles are tweeted there. The main damage is on Dublin-based Twitter. It is better to have all the litigation, in my personal opinion, under one roof.”

The American author has sold 4,480 books in the Irish market since the beginning of 2017, according to Nielsen Datascan, the UK-based firm which tracks book sales. This compares with 46,676 in the UK for the same period.

Buzzfeed News editor-in-chief Ben Smith said the website stood “unequivocally” behind the articles it published about Mr Robbins, basing its reports on hundreds of interviews, audio recordings and documentary evidence.

The online news outlet said that Mr Robbins had chosen to “abuse the Irish court system” by suing in Dublin.

Mr Tweed rejected Buzzfeed’s accusation as “absolutely nonsense” referring to the 2014 case in Ireland in which he represented Hollywood couple Justin Timberlake and Jessica Biel over an article that appeared Heat magazine.

“I know the media will love to jump on this as some form of libel tourism,” he said.

The Belfast solicitor said that the “bottom line” was just as many copies of Heat were sold in Ireland per head of population as in the UK. The couple received an apology from the German publisher of the magazine.

Mr Tweed said that, similar to the Timberlake-Biel case, the same number of people read the articles in Ireland as in the UK on a “pro rata per head” basis. The Buzzfeed journalists who wrote the articles are based in the UK, he said.

Defending the decision by Mr Robbins to sue in Dublin, Mr Tweed said: “His books are available in all the bookshops in Dublin. You go to any bookshop you find Tony Robbins self-help books. He has speaking engagements here. He has an international reputation.”

The self-help writer has not ruled out taking legal actions against Buzzfeed in other jurisdictions, he said.

Buzzfeed rejected any justification for suing in Ireland based on the fact that their journalists are based in the UK.

“Ireland is a sovereign nation that hasn’t been part of the UK for nearly 100 years. This is a bizarre and flimsy attempt to justify a transparent legal manoeuvre,” said Buzzfeed spokesman Matt Mittenthal.

The British parliament has put an end to the UK being used for libel tourism with the 2013 Defamation Dct limiting libel cases in the English courts to claims involving defendants domiciled in the UK or an EU member state.

There is no similar statutory restriction in Irish law. The High Court has jurisdiction if a defamatory statement is published in Ireland and the aggrieved party claims to have suffered damage to their reputation here.

Minister for Justice Charlie Flanagan said the use of Irish courts for overseas libels actions was being “assessed by policy and legal experts” and a report with “options for reform” would be submitted to him before the end of March.