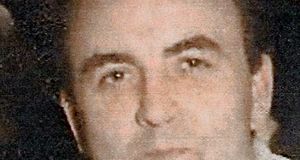 A search for a former monk abducted and killed by the IRA more than 40 years ago has ended without success.

Specialists from the Independent Commission for the Location of Victims’ Remains (ICVLR) had spent several weeks digging on land at Oristown, Co Meath but failed to find remains of Joe Lynskey.

He was kidnapped in west Belfast in August 1972 and became known as one of the Disappeared.

Jon Hill, senior investigator with the ICLVR said: “It’s always deeply disappointing when a search is unsuccessful. “The information we were working from was given in good faith and warranted further investigation.

“Unfortunately that has not produced the result that we all hoped for.” During a previous search at nearby Coghalstown in 2015 the remains of Kevin McKee and Seamus Wright were recovered. Mr Hill said more information was needed to find Mr Lynskey.

A forensic scientist leading a search said he is frustrated beyond words that nothing has been found.

Geoff Knupher said there are no present plans for any further searches for Joe Lynskey’s body, after a six-week operation at a half acre plot of land at Oristown in Co Meath ended without success.

“It is very frustrating for us but terribly upsetting for his family who desperately wanted their loved one returned to them for a burial,” he told RTÉ’s Morning Ireland.

“It is frustrating beyond words. An awful lot of work and effort has gone into this, as does with all our searches.”

“We are conscious of the hurt of the family at the present time.”

Mr Knupher, who helped find the bodies of the victims of Moors murderers Ian Brady and Myra Hindley, has been leading searches for the remains of the so-called Disappeared.

Also still missing are the bodies of Columba McVeigh and Robert Nairac.

Mr Knupher said they have no information to prompt a search for Mr Nairac “but we do have information on Columba McVeigh and we hope to carry out a further search in due course, but it early days yet.”

Meanwhile, Mr Lynskey’s niece Maria Lynskey, who visited the site on the first day of the search and has closely followed the process, said she retained hope.

“All I can do is to hope and to pray,” she said. “Hope that there is someone out there who knows something and pray that they will have it in their heart to help us to bring Joe home for the Christian burial that he has been denied for nearly 50 years”.

Some 16 people were abducted, killed and secretly buried by republicans in the 1970s and 1980s. They included mother-of-10 Jean McConville, father-of-five Charlie Armstrong and 21-year-old Peter Wilson who had learning difficulties. Collectively they became known as the Disappeared victims of the Troubles. In addition to Joe Lynskey, the remains of Columba McVeigh and Robert Nairac have yet to be recovered.

The ICVLR was set up following the 1998 Good Friday Agreement to help recover the remains. - Additional reporting PA