Rising social media use may be behind surge in defamation cases 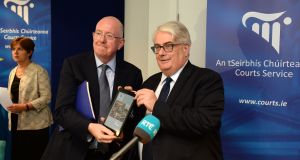 The Annual Report of the Courts Service for 2017 was presented by the Chief Justice Frank Clarke to Minister for Justice Charlie Flanagan. Photograph: Dara Mac Dónaill/The Irish Times

A sharp increase in the number of defamation cases taken in the courts last year could be the result of growing social media use and people in the State having more money to take such actions, solicitors believe.

Figures from the Courts Service service show there was an 85 per cent increase in the number of defamation cases taken in the Circuit Court last year - up from 73 in 2016 to 135.

The Circuit Court, where cases are heard by a judge sitting without a jury, is the cheapest venue in which to take a defamation case but it can award a maximum of €75,000 in damages..

High Court defamation cases are heard by a judge and jury and usually result in far higher legal fees. However, the amount of damages that can be awarded in such cases is not capped.

Actions in the High Court, which usually involve traditional publishers and broadcasters, increased by 12.5 per cent last year from 133 to 152. Circuit Court actions are more likely to involve individuals due to the lower costs involved.

The increase in Circuit Court cases appears to follow a trend seen in the UK, where people have become more likely to take actions over alleged defamatory comments made about them on social media. That trend has started to reverse in the UK more recently since the laws on what constitutes defamation were tightened.

From a complainant’s point of view Ireland has some of the most liberal defamation laws in Europe. Unlike in the UK, a defamed person does not have to prove the defamation caused them harm, just that it occurred.

Defamation lawyers who spoke to The Irish Times were surprised by the increase and suggested it could be due to several factors.

Sarah Kieran, of Media Lawyer Solicitors, said the fact the recession has ended means people may have more resources to pursue such actions.

An increase in the monetary jurisdiction for Circuit Court cases in 2014 from €38,000 to €75,000 could also be contributing to the increase in cases being taken there.

Solicitor Michael Kealey said it could be the case that social media is fuelling the rise.

“Social media is much more wild west than traditional media. People put up stuff and don’t go through the checks they would go through [in a media organisation],” he said. “The difficulty is if you’re going to sue someone you have to make sure they have something worth suing for. That might not always be the case with social media.”

Mr Kealey said this might explain why the rate of increase is much more pronounced in the Circuit Court than in the High Court.

The Court Service statistics also show a 22 per cent increase in the number of rape trials taking place, up from 59 in 2016 to 77 last year.

The number of trials for murder and attempted murder almost doubled from 21 to 41, which is partly a result of the ongoing gangland feud in Dublin and subsequent garda actions against those involved.

The statistics reflect an improving economy with house repossession orders down by 52 per cent in the last four years while employment dismissal appeals were down 51 per cent year on year.

A rise in economic activity was reflected in the increasing workload of the commercial court, the fast-track court which deals with contract disputes worth more than €1 million. It saw a 23 per cent increase in its workload.

In the area of family law, domestic violence victims had to wait at least a week for their case to be heard in 15 of 34 court districts.

In all districts, emergency interim applications for safety or barring orders were held as soon as the court sat next. However there was a waiting list of up to 12 weeks in many districts for the full case to be heard,

Last year was also the first full year of operation of the second Special Criminal Court. The court, which deals with organised crime and terrorism cases, sat for 273 days in 2017 - the most in its history including during the troubles.