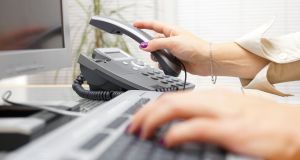 A receptionist has been awarded €51,168 by the Labour Court. Photograph: iStock

A receptionist has been awarded €51,168 by the Labour Court as compensation for discrimination over how she was treated when she returned to work from maternity leave.

The award is the highest available to the Labour Court and is untaxed. The court found against G4S Security Solutions (Ireland), the woman’s former employer.

The Labour Court was told that when she sought to return to work after maternity leave in March of last year, G4S said its client wanted the man who had filled in for her while she was away to remain in the job.

She was then offered a position in the G4S offices in Ballymount, Dublin 12, which would have involved a four-hour round trip commute.

Ms Kelly told the court she, her partner, and her baby boy had to move from her home in Rush to stay with her parents after she lost her position with G4S. There was a time after the company stopped paying her when she couldn’t sign on for social welfare, because she couldn’t get her P45 from her former employer.

The Labour Court decided the offer of work at Ballymount was “less favourable” to Ms Kelly than the work she had before going on maternity leave.

G4S did not offer any other alternative job and stopped paying her on April 18th, 2018. In June she sought the return of her P45 but it was not returned to her until after an adjudication hearing at the Workplace Relations Commission (WRC) in December 2018.

Ms Kelly, represented by Mairéad Carey solicitors, said she had been discriminated against under the Employment Equality Acts, as her employer had not complied with the alternative employment requirement set out in the Maternity Protection Act, 1994.

G4S argued that it was the company’s client that had said it wanted to retain the services of the male employee. The client had a contractual entitlement to decide who it wanted to have on site, G4S said. It also argued that Ms Kelly had resigned, as she had requested her P45.

Ms Kelly told The Irish Times she was “delighted” with the outcome of the case, and that she had found the whole experience to be very stressful.

“I’m so happy. It has been a hard year, what with the new baby and everything,” she said.

She said that in the period after she lost her job, “no-one would believe that I was let go because I’d had a child”.