Man (56) ‘stolen’ by nuns as a baby begins legal action

Terry Doran says his mother told him: ‘I never gave you away, you were taken from me’ 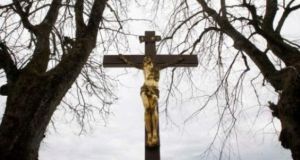 Terry Doran attended the Belfast high court on Thursday to commence his lawsuit for the alleged forced adoption at a home in Newry, Co Down.

A man has begun legal action over claims he was “stolen” from his unmarried mother as a baby by Catholic nuns.

Terry Doran attended the Belfast high court on Thursday to commence his lawsuit for the alleged forced adoption at a home in Newry, Co Down.

Mr Doran (56) contends that he was illegally taken across the Border just months after he was born. His case against The Good Shepherd Sisters involves a claim that his mother’s signature was forged to facilitate the move without her consent.

“I was stolen from her in the middle of the night and taken into a different country,” he said outside court.

According to papers in the case, he was born in December 1962 and christened James Joseph Mitchell. His mother, Alice McCausland, had left her home in Co Tyrone because she was unmarried and pregnant. They moved into the Marianvale mother and baby home which operated in Newry until the mid-1980s.

Mr Doran claims he was taken to another home in Fahan, Co Donegal in March 1963, despite Ms McCausland refusing to give him up.

His lawyers alleged it had been “clandestine and gratuitously cruel”, with one of the nuns simply telling her that her baby was gone and she would not see him again. He was subsequently adopted and raised by a couple in Co Derry.

Mr Doran did not see his mother again for another 46 years, with their reunion taking place at a Derry hotel in 2010.

“The first words out of her mouth were ‘I never gave you away, you were taken from me. I woke up in the morning, the cot was empty and I was sent home’,” he said.

“It looked like she had waited all those years to tell me that.”

Mr Doran then relocated to Omagh, Co Tyrone to be closer to his mother. Although she died in 2017, Ms McCausland’s estate is pursuing a similar claim for damages on her behalf.

Lawyers are alleging negligence by a failure to take care of the plaintiffs at the Marianvale home, forcefully separating them, removing Mr Doran to another jurisdiction and concealing the true circumstances of the separation from his mother. The case was mentioned in court on Friday, with a further review listed for September.

Mr Doran’s solicitor, Kevin Winters of KRW Law, pointed out that his client’s case was not covered by the historical institutional abuse inquiry. “Terry and his mother, like many others in the same position, are the forgotten victims,” Mr Winters said.