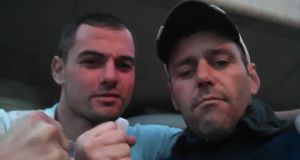 Damien Singleton (left) has been charged with the murder of Peter Donnelly (right) on O’Connell St in Dublin on Tuesday morning. Photograph: via Facebook

A 28-year-old man has been remanded in custody after he was charged with the murder of his friend who was fatally stabbed to on Dublin’s O’Connell Street earlier this week.

Peter Donnelly, a father of one from Kilkenny, had moved to Dublin last summer and was living at various addresses and hostels, and sleeping rough across the capital.

Mr Donnelly, who studied health and fitness, died after he sustained serious injuries on O’Connell Street at about 1.40am on June 11th.

Damien Singleton, originally from Cork but of no fixed abode, was charged with Mr Donnelly’s murder and the production of a knife in connection with the incident.

The arrested man, who is unemployed, had his detention at Store Street Garda station prolonged so he could receive hospital treatment to a hand injury and undergo surgery.

He was brought before Judge Bryan Smyth at Dublin District Court on Friday.

Dressed in a green T-shirt, grey trousers and runners, he sat silently throughout the hearing with his left forearm in a cast.

Detective Sergeant Brendan Casey told the court the accused was formally cautioned and made no reply when arrested for the purpose of being charged at 7.03pm on Thursday “for the offence of common law murder”.

The defendant was charged just before 8pm, the court was told. The charges were read to him and Mr Singleton “made no reply”.

Det Sgt Casey applied for a remand in custody and asked for the defendant to appear at Cloverhill District Court on June 18th next.

Solicitor Tracy Horan, for Mr Singleton, consented and said her client would appear via video-link at the next hearing. She asked the court to direct medical attention in custody.

“My client, Mr Singleton, had very severe hand injuries and he needed surgery the day before yesterday,” she said.

Legal aid was granted after a statement of means was handed in to court.

The judge remanded Mr Singleton in custody and said he presumed the defendant would get treatment.

A book of evidence has yet to be prepared and a bail application will have to be made in the High Court. The district court cannot adjudicate on bail in murder cases.