‘If gardaí tried to take my phone now, I’d ask do they have a valid reason,’ says one 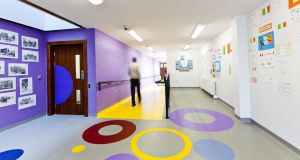 “When you are out in Dublin, a guard stops you without any reason and brings you to the station, and you are let out 20 minutes later, which is a waste of your time. But I didn’t know they weren’t allowed stop you.”

The speaker is a teenager who is serving a period of detention in Oberstown Detention Centre, near Lusk, Co Dublin, and has just completed a course on the law given by trainee solicitors.

The topics discussed during the programme include such rights as freedom of speech, the right to be left alone and property rights.

Violent contact in sport is another topic discussed. “It’s mad, when you think about it, that if you start boxing the head off someone in a football match, it’s grand, you just walk off the pitch, but if you do it on the street you get locked up for it.”

The numbers are very small, but they are a very challenging bunch

They also discuss the implications of being a trained boxer. “If you hit someone on the street, you get done for section 4 instead of section 3, because your hands are a weapon.”

Two of the participants, “John” and “Peter”, have agreed to discuss the course with The Irish Times. They both return frequently to the topic of being stopped on the street by gardaí.

“When you walk around the town, you get stopped at least once every two or three days,” says John.

“I get stopped at least eight times a night, at a minimum,” says Peter. “The guards don’t like me in town at all, because of [my] recent bad behaviour.”

Both say that, having done the course, which is part of the Law Society’s Street Law programme, they have a clearer idea as to their rights.

Both say they have had phones taken and checked by members of An Garda Síochána when stopped on the streets.

“Before, I would have given them the phone,” says John. “If they tried to do it now, I’d ask do they have a valid reason.”

He might also give “less cheek” when stopped. “If you start raising your voice and telling them to go away, then they have a valid reason [for stopping you].”

“I’d probably take my phone out and record it, because you are allowed,” says Peter.

“You are allowed record anywhere you want, as long as it is a public place,” John chips in.

During the course the youths learn about the arrest of Eric Garner, who died in New York in 2014 while being restrained by a number of police officers. The death was filmed and formed part of the impetus behind the Black Lives Matter movement.

They also watch footage of the trial of Adnan Syed, who was convicted of the murder of his ex-girlfriend, Hae Min Lee, in 1999, when both were high-school students in Baltimore, Maryland. The conviction, which is the subject of a popular podcast, Serial, is controversial.

Street Law originated in Georgetown University in the US in 1972 and is now taught by law students globally.

The course was adapted by the Law Society to fit the needs of young people in Oberstown. John and Peter say they would like to learn more, and for the course to be more about Ireland and less about the US.

Oberstown is the State’s only detention centre for children under 18. Most who are sent there serve sentences of six to nine months, and on the day The Irish Times visits, all 30 or so of the teenagers being detained are male. There are schools and sports facilities on the campus, which has a staff of 260.

“The numbers are very small, but they are a very challenging bunch,” says Lena Timoney, deputy director of care services at the centre.

Many have very difficult backgrounds, and the staff seek to support them in all the ways they can.

“We want to do ourselves out of a job. We would prefer if no young person was put in detention.”