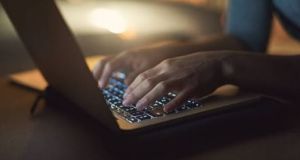 Some children remain at risk from parents or carers who are suspected of possessing illegal material, known in the legislation as “child pornography”, but who can’t be arrested because their electronic devices have yet to be analysed. File photograph: Getty

A backlog of online child abuse investigations is leading to a nearly five-year delay between the start of an inquiry and the sentencing of offenders.

An Irish Times analysis of every case of possession or distribution of child abuse material which came before Dublin Circuit Criminal Court for sentencing in the last two years shows some cases are taking nearly 10 years to complete, with the problem getting worse in the last year.

Child protection advocates are concerned the delays are exposing children to unnecessary risk and that the authorities are missing opportunities to rescue children depicted in the material.

Some children remain at risk from parents or carers who are suspected of possessing illegal material, known in the legislation as “child pornography”, but who can’t be arrested because their electronic devices have yet to be analysed.

There is also evidence to show the delays are leading to offenders receiving lighter sentences. There have been several cases in recent years when judges have taken the delay as a mitigating factor when imposing sentence.

Twenty five (58 per cent) of those avoided a prison sentence, receiving either a suspended sentence or probation.

Serial offenders, offenders who distributed child abuse material to others and offenders charged with additional sexual offences tended to receive jail terms, the highest of which was six years.

However, there was at least one case where a serial offender received a non-custodial sentence. Another offender convicted of distributing material also received a suspended term.

According to the analysis, an average of four years and 10 months elapsed between gardaí first seizing a device suspected of containing illegal material and an accused being sentenced. In 2018, the average was four years and six months, in 2019 it was five years and one month.

Most of the delays can be traced back to a bottleneck of devices awaiting examination by the Garda National Cyber Crime Bureau which is responsible for forensically examining computers and other technology suspected of containing videos or images of child abuse.

However, there have also been significant delays in gardaí acting on tip-offs from foreign police forces and in gardaí transferring devices to the bureau for analysis once they have been seized.

A report from the Garda Inspectorate, published in February 2018, stated it could take up to a year for gardaí to act on tip-offs received from the force’s child exploitation intelligence unit.

The backlog issue first came to light in 2013. A year later, then minister for justice Frances Fitzgerald promised to introduce measures to overcome excessive delays.

Five years on, while some reforms have been introduced and extra resources allocated, the delay remains a serious child protection issue and, according to the inspectorate, a “significant organisational risk” to the Garda.

Each child abuse image or video is “a crime scene”, said Maeve Lewis, executive director of the charity One in Four which offers treatment to both victims and perpetrators of abuse.

“When they are examined, there will be an effort to determine where the image was taken. If there is a huge delay it becomes almost impossible to locate the child in the image who is very definitely at risk from abuse.”