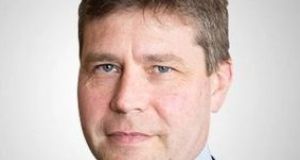 Kevin Lunney was subjected to a 2.5 hour ordeal after his car was rammed off the road as he drove home from work last Wednesday evening . Photograph: PA

Quinn Industrial Holdings has contacted the Garda and PSNI with a formal request to obtain Facebook data from the social media company that it believes will assist the cross-border investigation into a campaign of violence against its executives.

The request is based on two Facebook pages, one of which is the Sean Quinn Community Page.

The Sean Quinn Community Page has been removed by Facebook in recent days. The Irish Times understands it was removed for violating Facebook’s authenticity policies.

Sources within Quinn Industrial Holdings said they had tried for years to have the Sean Quinn Community Page removed. They were very surprised to see it removed now only after the violence perpetrated against its chief operating officer Kevin Lunney last week.

One source pointed out the account had not been updated since last month, adding it was unclear why it had been deemed by Facebook to be contrary to its policies now but but not at any time over the past number of years.

In reply to queries, Facebook said there was “absolutely no place for threatening bahviour” on its platform.

“Over the past few years, following reports, we have investigated and removed a significant number of posts about senior executives of Quinn Industrial Holdings for violating our community standards,” it said.

QIH has now contacted the Garda and PSNI urging them to act quickly to make an official request to Facebook for the data linked to the pages before the identities of those who run the pages are deleted or expire from records.

The Facebook pages have published material denigrating the executives running Quinn Industrial Holdings and have sought to promote the return of Sean Quinn to an ownership role at the businesses run by QIH.

However, Mr Quinn has no involvement whatever with either Facebook group. He has also condemned the intimidation and violence directed at the QIH executives, including the abduction, beating and torture of Kevin Lunney last week.

The 50-year-old married father was subjected to a 2½ hour ordeal after his car was rammed off the road as he drove home from work last Wednesday evening.

He was taken from his vehicle by four masked men, in Fermanagh, and after being held and beaten was dumped by a roadside that night on the southern side of the Border in Co Cavan.

In its request to the Garda and PSNI to seek data about the Facebook groups that have published material about its executives, QIH has said it did not believe the people behind the Facebook groups were the same people who carried out last week’s attack on Mr Lunney.

However, QIH believes the list of administrators along with the internet protocol address and devices used to create posts would be useful intelligence for the Garda.

QIH contends that while the campaign against its managers has taken the form of arson attacks, plant machinery being sabotaged and intimidating graffiti and signage appearing in Cavan and Fermanagh, many of the social media posts have been designed to intimidate and threaten them.

And they also believe the sharing of posts online has incited others to hatred against them.

In one post on the Sean Quinn Community Page, for example, it was claimed that a “kangaroo court” verdict and sentence had been imposed on five named executives of QIH, with their photographs included in the same post.

“In the early eighties we had the notorious Shankill Butchers, based in Belfast they were led by a man called Lenny Murphy, ” a post published on the page last September stated.

“Now… based in Derrylin we have the Derrylin Butchers have (sic), and continue to stab Seán Quinn in the back.

“This gang is led by local men, Kevin Lunney and Liam McCaffery, and with the help of Tony Lunney, John McCartin and Dara O’Reilly. All pictured below.