Parents of Jason Corbett hoping for end to ‘horrible nightmare’ 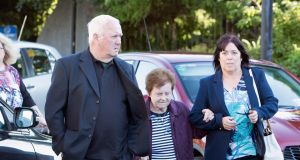 John and Rita Corbett, parents of Jason Corbett, with their daughter-in-law Pauline Corbett.

The parents of Limerick man Jason Corbett, who was found beaten to death in his North Carolina home, have said they are “praying for justice” for their son.

Mr Corbett (39) died from catastrophic head injuries on August 2nd, 2015, after he was struck a number of times with a metal baseball bat and a garden paving slab.

His wife, Molly Martens Corbett (33) and her father, retired FBI agent Thomas Martens (67), are both on trial in Lexington, North Carolina, charged with second-degree murder.

As the jury in the trial began to consider its verdict on Tuesday evening, Mr Corbett’s heartbroken parents John and Rita Corbett attended a special mass in Limerick to mark the second anniversary of their son’s death.

The mass was broadcast live online and members of the Corbett family attending the trial in Lexington were said to be tuning into the ceremony.

Speaking outside St John’s Cathedral, Mr Corbett’s 76-year-old mother, Rita, said: “It’s been a nightmare. No one could understand this, unless they’ve lost their own children.”

“It’s heartbreaking. It’s hard to pick yourself up again, I can tell you.”

Mrs Corbett said she and her husband were “hoping for justice, that’s it”.

She said she hoped her family could “grieve in comfort” once the trial ended.

“We’ll never move on, to be honest, never, never.”

The grandmother described as “too horrible” her son’s killing, as well as the gruesome details surrounding his death, which were heard during evidence at the trial in Lexington.

Standing at his wife’s side, John Corbett (81) said he was feeling “very down”. He said they were “hoping” their children and loved ones who were attending proceedings in the US would “get back home [soon].That’s the whole thing, get the lads back home, out of it”.

Mrs Corbett thanked those who have supported the Corbett family through their ongoing ordeal. “I’ll tell you this, the Limerick people are great people. When you need them, they’re there,” she added.

Pauline Corbett, Jason Corbett’s sister-in-law, also thanked the large crowd who attended the mass. “The support is overwhelming from everyone here. You couldn’t ask for more, they’re great people,” she said.

The Limerick Unity Community Gospel Choir performed the Eurovision winning song Love Shine A Light, “as a metaphoric candle to light the way for the Corbetts”, said organiser and choir director, Gretta O’Shea.

The choir also performed Gospel favourites The Storm Is Passing Over and Let Ye Wait, The Beatles’ hopeful ballad Let It Be, before ending with a version of 1980s chart hit Something Inside So Strong.