One year on, has the Belfast rape trial resulted in any change?

The North is seeing reforms, but the impact of the Jackson and Olding case is limited 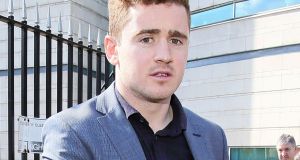 Irish rugby player Paddy Jackson after being found not quilty of a charge of rape, on March 28th, 2018. Photograph: Paul Faith/AFP/Getty Images 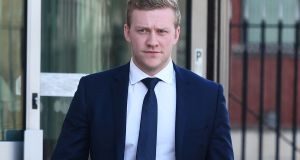 Ulster and Ireland rugby player Stuart Olding, who was found not guilty of rape and sexual assault after a trial at Belfast Crown Court last year. Photograph: Pacemaker Press

It was the trial that captured the attention of the island, and beyond. Paddy Jackson and Stuart Olding walked free from Belfast Crown Court a year ago this week, after they were acquitted following a nine-week trial on charges of rape.

The trial was seen by many as Northern Ireland’s #metoo movement, particularly after strong criticism of the treatment of the alleged victim during nine days of cross-examination.

It would, in the eyes of many, serve as a catalyst for improving the criminal justice system, particularly in the area of complainants’ rights.

A year on, the investigation and prosecution of sex crime in Northern Ireland is being transformed. However, according to lawyers, police officers and prosecutors who spoke to The Irish Times, this process had begun before the trial. And not everyone is entirely happy with the direction in which the changes are going.

Two years ago, after Jackson, Olding and their co-accused were charged but before their trial, a group of barristers from the Bar of Northern Ireland travelled to Britain to observe a pilot project that promised drastic change for how alleged rape offences were prosecuted and defended.

The pilot involved alleged victims of sexual assault giving their evidence long before the trial began. The testimony was recorded, so it could be played back to the jury at trial. The complainant never had to undergo the distressing process of giving evidence in a courtroom.

Crucially, the process of cross-examination of the alleged victim also took place long before the trial. In theory the complainant would never have to attend the trial at all. The Northern Irish barristers were “gravely concerned” by what they saw.

Gavin Duffy QC, the chairman of the Bar of Northern Ireland and someone with vast experience in dealing with rape and sexual assault cases, believed such changes would make life easier for the complainant, but would put defendants at a serious disadvantage.

For one thing, says Duffy, who represented one of the defendants in the Jackson/Olding trial, the recorded cross-examination would be likely to be carried out by a different lawyer to the one eventually appearing at trial.

And it would be likely, too, to take place before all of the evidence in the case had been disclosed and handed to the defence, meaning lawyers could not question the complainant on issues that could later turn out to be crucial.

Duffy, however, is conscious of the need to make trials less traumatic for complainants. “But we must have a system that people can have faith that it will acquit the innocent. That’s the most important thing.”

The Liverpool pilot project was deemed a success and the UK government is eager to roll it out across Britain and Northern Ireland, to the dismay of many trial lawyers, not just those who travelled from the North.

However, it has supporters, too – and not just in the UK. The Rape Crisis Network Ireland (RCNI) in Dublin wants such rules introduced in the Republic, something which is currently being considered as part of a Government-commissioned review which is due in the next few weeks.

“Pre-recording a Garda statement soon after a complaint has been made maximises the potential of the witness to recall, fully and accurately, what happened, to give his or her best evidence and to help minimise the risk of secondary traumatisation by reducing exposure to the adversarial criminal justice process itself,” RCNI said.

Northern Ireland will make its own decision, but it looks like it may follow Britain’s lead. Following the Jackson/Olding trial, retired judge John Gillen was asked to review how the North handled rape and sexual assault prosecutions.

He produced 220 recommendations, including one urging that complainants’ cross-examinations should be prerecorded. If the system had been in place before last year’s trial the alleged victim, a woman in her early 20s, would still have had to go through a lengthy cross-examination but she could have done so in a less intimidating setting, beyond the glare of the media and the general public.

Ciaran McQuillan, assistant director of the Public Prosecution Service (PPS), Northern Ireland’s version of the DPP, knows both sides of the argument. Apart from a few “minor issues”, the PPS agrees with nearly all of Gillen’s recommendations.

Asked about the lawyers’ concerns, McQuillan said: “Our role is not to obtain conviction at all costs. We have an obligation to ensure the prosecution is conducted fairly. We’re very conscious of the impact it could have on defendants and suspects as well as witnesses.”

Gillen also proposed that the public – but not the press – should be banned from attending rape and sexual assault trials, and he also proposed that further restrictions be placed on the types of questions that can be put to a complainant.

Some believe the latter recommendation was prompted by the experience of the Jackson/Olding trial, but as Det Supt Anne Marks of the PSNI’s Public Protection Branch points out, Gillen was asked to address issues that had arisen in a wide range of cases.

“It was also based on other high-profile cases and cases in England that had to be pulled because of problems with disclosure,” says Marks.

Duffy says many of the reforms of sex-crimes prosecutions have been ongoing for years. Most of the changes, he went on, have benefited the prosecution.

Lawyers have done a poor job of communicating the trend to the public, leading people to believe the courts favour defendants more than they actually do, Duffy says.

Curbs have already been placed on the types of questions defence lawyers can ask complainants during cross-examinations. In certain situations juries can now hear an accused’s previous convictions during trial, he adds.

Duffy also rejects criticism over the length of time the complainant in the rugby trial spent in the witness box, pointing out the prosecution made no complaints about how the defence ran their cases.

Much of the nine days was taken up with replaying the woman’s police interview or reading back extracts from her statement rather than direct questioning: “It’s a very delicate and complex process. Things have to be taken slowly to ensure mistakes aren’t made,” Duffy says.

Last week, a case in Belfast collapsed at the last minute because a “relatively minor piece of evidence was introduced when it shouldn’t have been”.

Like Duffy, McQuillan is eager to point to reforms under way long before the Jackson/Olding trial. “Our focus is not on one case, it’s on how to improve the system for everyone,” he told The Irish Times.

In 2016, the PPS set up a dedicated serious crime unit, led by McQuillan staffed by specialist prosecutors who deliver a high-quality service and secure high conviction rates in murder, manslaughter and human trafficking cases, said the PPS.

Equally, the PPS went on, it has significantly improved the prosecution of sexual offending cases and “has worked hard to actively address the underlying issues behind low conviction rates”, the PPS said.

Detectives meet early with prosecutors in an investigation to decide if a case should go ahead, which is particularly helpful where the alleged victim is reluctant to proceed. “There are many reasons a victim might feel they don’t want to support an investigation any longer,” said Det Supt Marks.

This allows the PSNI to drop cases which, without the complainant’s evidence, have no chance of success. Dropping these cases early means resources are freed up for other investigations.

Marks is also extremely proud of the Rowan Sexual Assault Referral Centre (SARC) in Antrim which was set up in 2013 and is half-funded by the PSNI. Its main function is to gather useful evidence. Equally, it tries to do so in a way that is as caring as possible.

Victims who don’t want to make a criminal complaint for whatever reason can have samples taken at the Rowan, which are safely stored in case they change their mind later.

“In my opinion, it’s the gold standard,” Marks says. “It takes the police out of it. Before, the Rowan victims had to come into the police station – it was all about forensics and very little about care.”

Both the PSNI and the PPS also said they are conscious of how social media is changing what Marks calls “the whole sexual crime world”.

“We know offenders use social media to groom people, to blackmail people. So there’s a real onus on educating young people and their parents to keep safe,” says Marks.

Social media and private messaging, equally, can be a vast source for evidence for prosecutors, but this requires skills and resources. “It’s a huge area and we take it very seriously,” the detective superintendent says.

The breach of a rape complainant’s right to life-long anonymity by publishing their name on social media is also a concern for the PSNI, as demonstrated by the conviction of a man last year for publicly naming the woman who made complaints against Jackson and Olding.

“We take anonymity very seriously for victims,” Marks says. “The last thing any victim wants to see is their anonymity being breached.”

The number of reports of rape and sexual assault has risen sharply in Northern Ireland since last year’s trial ended, but it is not clear whether it was a factor.

The #MeToo movement has had its influence, so, too, did the 2017 Hart inquiry into historical child sex abuse in Northern Ireland.

Campaigns by the PSNI and other agencies, such as last year’s No Grey Zone campaign, which sought to discourage “bum-squeezing”, “boob fondling” and “crotch- grabbing”, have played a role, too.

Equally, the modernisation of the PSNI’s approach to victims has encouraged more people to trust the force. “Our approach has completely changed, as is the case with every police force. That has instilled confidence.”

Ashleigh McDonald, a reporter who covers rape trials in Belfast, agrees that the number of cases was rising long before the Jackson/Olding trial. “It’s probably been going up since the Jimmy Saville allegations.”

Despite the raft of reforms in the pipeline, those like McDonald and Duffy, who work in the courts every day have noticed little change in day-to-day procedures since last year. The Gillen review is a work in progress and a final report is not expected until later this year.

Rape trials continue on as they had before March 2018, although with much less public interest, says McDonald - something which she believes is not necessarily a bad thing.

“The rugby trial wasn’t a rape trial, it was a celebrity trial. There were so many firsts in the trial that you won’t see repeated,” she says. “I’d never reported on a trial like that before and I don’t think I will again.”