Cybercriminals targeting students for use as unwitting money launderers 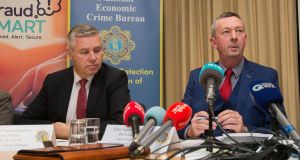 Students around Ireland are being tricked by cybercriminals into becoming unwitting money launderers, gardaí say.

Gangs specialising in online fraud are approaching people on Irish campuses and asking them to allow money to be transferred through their accounts. The account holders are usually paid a few hundred euro in exchange.

Fraud gangs previously used their own bank accounts or laundered the cash through businesses but stricter anti-money laundering legislation and monitoring systems no mean this is much more difficult.

Criminals are now forced to split up the proceeds of their crimes into smaller amounts, typically a few thousand euro, and store it across several different bank accounts. The criminals, who are primarily non-nationals and not based in Ireland, make their money through online confidence scams.

These include CEO fraud (impersonating the head of a business to convince an employee to transfer over money), romance fraud (starting a relationship with someone – usually online – before convincing them to hand over money) and invoice redirection scams (emailing a business pretending to be a supplier and convincing it to change the account it pays invoices to).

Gardaí say the gang then hires “money herders” who in turn recruit “money mules” – typically gullible young people – to store the money in their accounts.

Much of this recruitment takes place through approaches on college campuses but it also happens online.

“Get rich quick” or “earn money at home” advertisements shared over Facebook, Instagram and on WhatsApp are used to recruit mules.

Gardaí say many of these mules realise they are being used in money laundering but are either too scared to speak up or are unaware it is a serious crime.

In the last three months the Garda National Economic Crime Bureau ) has targeted a “high-level” network of cybercriminals as part of a Europol led operation targeting the use of money mules across Europe.

Fifteen searches have been carried out and four cars thought to have been purchased using the proceeds of crime have been seized. Bank accounts containing €300,000 have also been frozen.

Gardaí estimated a total of 165 fraud victims have lost €14.6 million to the network in recent years.

No arrests have been made but Det Chief Supt Pat Lordan said this was likely to change.

“If you come back in six months time we will have a lot of arrests,” he said.

Across the EU, 1,504 money mules were identified during the three month operation, which led to dozens of arrests.

Mr Lordan urged young people to be aware of the scam.

“It can be as simple as someone coming up to you and saying: ‘I don’t have a bank account. I’m from another country. Can I use yours so my relative can transfer money into it?’”

“We find young people are unaware or uninterested in the consequences,” he said. “If you realise money has come into your account and you now suspect it’s from a criminal network, you need to pick up the phone to your Garda station or bank.”