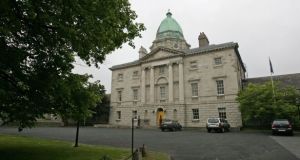 Forty-one solicitors have been reported to An Garda Síochána over the last four years by their regulatory body for suspected financial offences.

Most of these offences related to suspected money laundering which was uncovered by the Law Society, the profession’s regulatory body, during investigations into separate matters.

The body has two separate sets of obligations to report suspected offences to the Garda and Revenue. One relates to a wide range of financial crimes while the other relates specifically to money laundering and terrorist financing.

A total of 33 solicitors have been reported since 2014 for suspected money laundering offences. Other suspected offences included theft, tax evasion and conspiracy to defraud.

In one case an investigation into a solicitor’s accounts showed that the firm allowed €450,000 in undrawn costs to build up in one of its client accounts. The firms failed to declare the money to the Revenue and it was not transferred to the client, which raised a suspicion of deliberate tax evasion and money laundering.

The firms were reported to the Revenue and the Garda under anti money-laundering legislation.

In another investigation into a solicitor firm’s accounts, the Law Society found the firm had used €50,000 of a client’s money for personal and office expenditure. The matter was considered by the society’s Money-Laundering Reporting Committee and decision was made to report it to gardaí.

As well as money-laundering offences, the society is also obliged to report certain other suspected crimes to the Garda under Section 19 of the Criminal Justice Act 2011. These include theft and fraud, banking and stock market offences, insurance fraud and bribery.

Although solicitors’ dealings with clients are usually privileged under law, “legal professional privilege has no application to the discharge of the Law Society’s statutory duties” under the mandatory reporting rules, a Law Society spokeswoman said.

“The Law Society is carefully considering the new legislation, which very recently passed through the Oireachtas, and is currently developing updated guidance for members,” the spokeswoman said.

The latest legislation requires businesses to conduct risk assessments before engaging with customers and to monitor client relationships on an ongoing basis.

The society has a helpline to advise solicitors on their anti-money laundering obligations and says calls to it have trebled in recent years and become more complex.

In Ireland and elsewhere, businesses and criminal organisations often use client accounts in law firms to hide money from the authorities, either for the purposes of laundering it or to avoid paying tax.

Solicitors are obliged by law to report any suspicious transactions by their clients.

Greater awareness of money laundering obligations and better reporting systems have seen a massive increase in the reporting of suspicious transactions in recent years.

The number of people prosecuted for money laundering more than doubled last year as gardaí charged 42 people with 168 such offences, up from 18 people being charged with 22 offences in 2016.