No plans to ban marches with paramilitary trappings

Department of Justice cites freedom to march, however repugnant the message 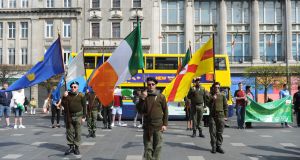 Members of Republican Sinn Féin during their Easter Rising commemoration outside the GPO in Dublin. Photograph: Aidan Crawley

There are no plans at present to ban public marches or displays with paramilitary trappings by subversive republican groups.

Minister for Justice Charlie Flanagan met Garda Commissioner Drew Harris to discuss the issue, and they have agreed that current legislation is robust enough. They also believe the Garda has all the resources it needs to police the events.

Separately, Mr Flanagan was briefed on progress being made by the Garda and PSNI in tackling the gangs stealing ATMs and has offered to meet representatives of the banking industry to determine if more could be done, such as GPS tracking in machines, to thwart the spate of robberies.

The march outside the GPO on O’Connell Street was seen as repugnant by many, coming as it did less than 48 hours after the New IRA, which Saoradh is linked to, shot dead journalist Lyra McKee in Derry.

Minister of State for Defence Paul Kehoe said condemning such marches was not enough, adding: “We have to prevent this from happening in the future.” He also questioned why Saturday’s parade was permitted.

Minister for Health Simon Harris echoed those views, saying the marching “must be examined and not allowed to happen again”.

In reply to queries from The Irish Times, the Department of Justice has effectively confirmed no plans were afoot to halt similar parades in the future. It cited the freedom to protest or march however repugnant the message.

“The law is kept under continuing review, but the Minister and the Commissioner are satisfied that a strong body of law is currently in place both with regard to terrorism and to ensure public order can be maintained at demonstrations and events,” it said.

Mr Flanagan and Mr Harris were both mindful of the need to uphold the right to protest or march, however distasteful the purpose, with the need to preserve the rule of law.

“They noted that current legislation facilitates the appropriate use of discretion by An Garda Síochána in what can be dynamic situations. The gardaí will keep this under review.”

As well as Easter Saturday’s march by Saoradh, the group staged a smaller event in Cork 24 hours later.

On Easter Monday, Republican Sinn Féin marched in Dublin, and later the same day the 32-County Sovereignty Committee held another march in the city centre.

Both marches on Monday involved men in military garb and both groups have long been linked to dissident paramilitary groups.

Marches by groups linked to dissident republicans, especially at Easter, have taken place for decades. They are regarded by the Garda as an invaluable policing opportunity, allowing members of the groups to be photographed and identified.

Senior Garda officers also believe the groups that hold marches would embrace any effort made by the Garda to stop their marches because of the disorder that would ensue.

The same sources said the groups would engineer flashpoints as frequently as possible in the hope regular disturbances on the streets, and clashes with gardaí, would act as a rallying call for them, raise their profile and attract young people to their ranks.

There is also concern within the Department of Justice that any effort to stop, or even draw attention to, the small and infrequent parades in the Republic would result in them becoming contentious, as parading has always been in the North.