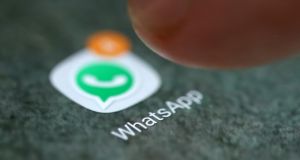 The Law Society is conducting a review of a Whatsapp group run by students called ‘Tits and Filth’. Photograph: Dado Ruvic/Illustration/Reuters/File Photo

A review of a law students’ WhatsApp group called “Tits and Filth” has uncovered no evidence of disparaging references to female trainee solicitors, the Law Society has said.

The body, which trains and represents solicitors, launched an investigation into the group after receiving complaints from several members.

The investigation into the private messaging group is continuing but the Law Society has completed a review of the group’s content, it said in a statement.

“The Law Society remains very concerned about students engaging in any inappropriate messaging on WhatsApp or otherwise. However, the Society is now able to confirm that the WhatsApp group does not contain references to any female students.

“Once the investigation has been completed the Law Society will determine what further disciplinary steps are required.”

Last week the Law Society started blocking the use of private message groups in its law school after learning of the group.

A warning notice was also sent to students stating the content of the group gave rise to “profound ethical concerns”.

TP Kennedy, director of education at the Law Society, which is based on Blackhall Place in Dublin, said the nature of the messages had caused “deep distress” to many students and that the behaviour would not be tolerated.

Mr Kennedy said those who had sent offensive messages may be “unfit” to qualify as solicitors and that all trainees must comply with and were subject to the same rules as solicitors.

He said posting “inappropriate content” may be deemed to have brought the profession into disrepute and could have implications for the futures of those trainees involved.