Martin Doyle vanished without trace from home in Suncroft, Co Kildare in October 2004 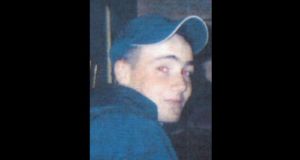 Also know as Murt, Martin Doyle left the family home at 11am on the day of his disappearance. Photograph: Garda Press Office

Gardaí have launched a fresh appeal for information about Martin Doyle, a 20-year-old Kildare man who vanished without trace 15 years ago.

Known as Murt, Mr Doyle disappeared from his home in Suncroft, Kildare, on October 4th, 2004. No trace of him has ever been found.

He left the family home at 11am on the day of his disappearance. He is described as 5ft 2in in height, of thin build with short brown hair, blue eyes and a pale complexion.

“When last seen Martin was wearing a navy jumper with a white stripe on the sleeve, navy tracksuit bottoms and runners. On the front of his jumper was the word Adidas in white lettering,” the Garda said in a fresh public appeal for information issued on Tuesday.

The missing man’s mother told The Irish Times around the time of her son’s disappearance the family felt powerless with nowhere to turn.

“It’s been a living nightmare; it’s just been hell. There is nowhere to turn. We haven’t received any counselling or support since Martin disappeared. Something has to be done,” said Mary Doyle.

“It just goes on and on. It’s so hard on everyone. With many families they can’t cope, and it can lead to someone committing suicide or a marriage break-up, and it’s very hard on the children.

“It’s a terrible thing; there is nothing, there is absolutely nothing you can do. It’s something the Government would rather sweep under the carpet.”

Anyone with information is asked to contact the Garda in Kildare Town station.