Man who was shot in Lucan ‘collapsed’ into house seeking help

Video footage shows a van which may have been used in a gun attack on a man in Lucan on fire in the Elm Way estate, West Dublin. The victim has survived the shooting but has been described as gravely ill. Video: Chris Brady 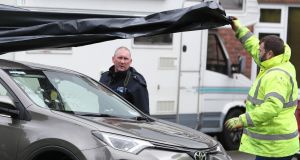 Gardaí covering up the vehicle in which the man was shot at Griffeen Glen Park in Lucan, with bullet holes visible in the windscreen. Photo credit should read: Brian Lawless/PA Wire

The man who was shot in a gangland-style attack in Lucan on Wednesday ran to a nearby house seeking help before collapsing from his injuries, eye-witnesses said.

The victim, in his 40s, was in his car at Griffeen Glen Park, Lucan, west Dublin, at 1.50pm when a gunman opened fire on the victim, shooting him a number of times through the front windscreen.

His car, a Toyota Rav 4, was located by the green in the middle of the estate, a few metres away from the entrance of a neighbouring park, when he was rammed from behind by a van.

The van, a Volkswagen Caddy,was found burnt out in Elm Way, an estate half a kilometre away from where the shooting took place.

The attackers fled the scene and were out of the locality before emergency services arrived.

The injured man, who is known to gardaí, appears to have been targeted in a pre-planned attack. He has survived the shooting but was described as gravely ill by sources.

Sources said the incident is believed to be connected to a previous shooting that happened in a nearby estate last year.

Local residents, who were at the scene, described seeing the man covered in blood, crawling out of the car and running to a nearby house.

They said the injured man suffered a number of upper body shots, including to his arms and near his eye.

“He just started banging on the door of the house until a man answered and when the door opened, he just collapsed into the man’s arms,” one witness said.

“A young girl was in the house at the time, too, and she is just so frightened.”

It is understood the injured man was brought into the house and placed on a chair while residents contacted the Garda.

Eye-witnesses described the man being brought out of the house on a chair when emergency services arrived, before being transferred onto a stretcher and put into the ambulance.

The victim was then brought to Connolly Hospital in Blanchardstown where he was described as being in a serious condition.

On Wednesday afternoon, the scene of the shooting, the burnt out vehicle, and the house in which the victim sought help were all cordoned off while gardaí examined the scene.

Local residents attended the aftermath of the shooting, including a number of children who were still in their school uniforms.

The local school, Colaiste Cois Life, is about five minutes away from where the shooting took place.

One resident, who asked to remain anonymous, said that the community was shaken by the incident because it took place in broad daylight.

“It’s not very nice for the kids to have to witness this,” she said.

Cllr Vicki Casserly, mayor of South Dublin County Council, who lives in the area, said the attack was a complete shock to the families living in the estate.

“It’s a quiet residential estate and it’s very frightening to the families around, having to experience and witness this,” Cllr Casserly said.

“Children are out at play here and it’s meant to be a safe environment, and this shouldn’t have happened on anyone’s doorstep.

“During school time as well, you have a lot of passing pedestrians.”

She called for local residents or witnesses to co-operate with the Garda during their investigations to prevent an incident like this from happening again.