Bill will strengthen monitoring of dangerous offenders on release from prison 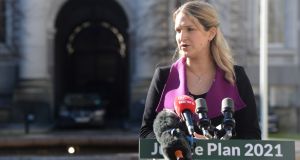 Minister for Justice Helen McEntee. Her department says the new law would include measures to monitor sex offenders on their release. Photograph: Dara Mac Dónaill

Information about potentially dangerous sexual offenders would be disclosed to members of the public under legislation that is expected to come before the Oireachtas later this year.

The Department of Justice intends to publish the Sex Offenders (Amendment) Bill before the end of June.

The aim of the legislation is to significantly increase powers to monitor sexual offenders in the community and to warn certain people of their presence.

The general scheme of the Bill was approved by the last government, in 2018, and the legislation is currently being drafted by the Office of the Parliamentary Counsel.

The department is treating the Bill as a priority and expects to publish it “in the coming months”, a spokesman said.

Earlier this month, it was revealed that just one in eight sexual offenders take part in the main treatment programme offered to them while in prison.

According to figures released to RTÉ, 443 sex offenders were released from prison between 2017 and 2019, of which just 55 had completed the Building Better Lives programme.

Minister for Justice Helen McEntee last week said there were no proposals at present to make participation in the programme mandatory for prisoners jailed for related offences.

She said many inmates are judged unsuitable for the Building Better Lives programme and are instead accommodated in different programmes.

In response to queries from The Irish Times, the Department of Justice said the new law would include a raft of measures to monitor sex offenders on their release.

“The purpose of the Bill is to enhance current systems for assessment and management of convicted sex offenders and to put those systems on a statutory footing,” a spokesman said.

This includes introducing a protocol to allow for the disclosure of information relating to high-risk offenders including their name, address and the threat they may pose.

No decision has been made yet on what categories of people will be given such information but it is understood employers, schools and neighbours of sexual offenders are likely to be included.

Currently sex offenders must only inform a prospective employer about their convictions if their work may involve them having unsupervised access to children or mentally impaired people. Members of the public have no right to information about a sex offender living in their area.

The Bill would also mandate for stricter requirements for sex offenders to notify gardaí of their address after their release from prison and any changes to their living arrangements within three days. The current maximum notification period is seven days.

Gardaí will also be able to fingerprint and photograph sex offenders for the purposes of confirming their identities.

The legislation will also allow a court to make an order prohibiting sexual offenders from working with children and will put sex offender risk-management teams on a statutory footing, the department said.

Sexual offenders are monitored by the Garda sex offender management and intelligence unit. It provides information to local inspectors who will make occasional visits to sex offenders’ homes to ensure they are living at the address they provided to An Garda Síochána.