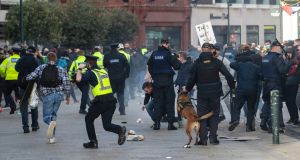 Minister for Justice Helen McEntee has said more of those who took part in Saturday’s “illegal gathering which turned into a riot” in Dublin city centre will face legal sanctions and warned anyone considering getting involved in such events in the future that they will face “consequences” for doing so.

Ms McEntee also accepted there was no evidence that members of what had been dubbed the “far-left” were involved in the violence, and she outlined the extent of the injuries suffered by Garda members during the violence.

Three gardaí were injured in clashes after hundreds of people gathered in Dublin city centre to protest against Covid-19 restrictions on Saturday. One garda needed hospital treatment.

After a stand-off between gardaí and demonstrators, the crowds made their way to the GPO on O’Connell Street, where traffic was stopped for much of Saturday afternoon.

She said one Garda member had sustained a broken ankle in the violence while another was treated for a perforated eardrum. A third officer sustained injuries after being knocked off a horse while trying to impose order, said the Minister.

Ms McEntee said she was reluctant “to get caught up in who was involved” in the violence but said Garda Commissioner Drew Harris had clarified earlier comments in which he suggested members of the far-left had taken part. She accepted that that was not the case.

She said many of those in Dublin city centre had travelled into the city in breach of lockdown guidelines and would be hit with fixed notice penalties as a result.

Ms McEntee addressed the fact that the protest which led to the violence appeared to have been organised on social media platforms and said people responsible “for spreading hate” would have to be challenged.

“We are all frustrated with Covid-19 but we are not taking to the streets and attacking members of the Garda,” she said, adding that she did not accept that anyone attended the event in Dublin “under a banner of frustration”.

She also said that as Minister for Justice it was not her role to determine how and when members of the force would be vaccinated against Covid-19, but expressed the hope it would happen as fast as possible.

The Minister’s response on vaccination was dismissed as “vague” by the general secretary of the Association of Garda Sergeants and Inspectors, Antoinette Cunningham.

Tánaiste Leo Varadkar on Sunday said the disturbances were a “riot” and it is “lucky somebody didn’t get seriously injured or killed”.

Speaking on Sunday morning, Mr Varadkar told Newstalk’s On The Recordwith Gavan Reilly that “it wasn’t a protest, it was a riot”.

“There’s no excuse for using that kind of violence to advance a political cause, no matter what that cause.” He praised gardaí for their intervention and the swiftness in bringing charges against 13 people arising from the incidents, saying it was “a really good example of very swift and very effective policing”.

The Minister for Business said he was a “great believer in free speech” but that gatherings such as Saturday’s are not allowed in Level 5 lockdown.

Meanwhile, Minister for Foreign Affairs Simon Coveney said people have a right to protest but denounced Saturday’s protest as illegitimate.

Speaking on RTÉ’s The Week In Politics, Mr Coveney said Covid-19 restrictions had caused a lot of angst, but said that what had occurred in Dublin on Saturday was “thuggery”.

“Yesterday wasn’t legitimate protest. It was people who were intent on thuggery, and violence and intimidation of the guards and the State. When someone is firing a rocket or firework from a few metres away from guards, that is not appropriate,” he said.

On the same programme Sinn Féin TD for Dublin Fingal Louise O’Reilly said the protest was a far-right action and a “slap in the face for frontline workers”.

Denis Naughten, the Independent TD for Roscommon-Galway, told the programme that what had happened was a “huge insult to every single frontline worker”.

On Sunday morning, Garda Commissioner Drew Harris said the vast majority of those who took part in the protest “belong to a number of factions including anti-vaccine, anti-mask and anti-lockdown protesters, far-right groups, and those intent on trouble and disorder”.

The commissioner was clarifying statements he made on Saturday, in which he said the groups involved were a mix that included the “far-left”. “Despite initial indications, following further investigation, there is no corroborated evidence of extreme left factions being involved,” he said on Sunday. He also thanked the public for their messages of goodwill for gardaí who policed the protest.

On Saturday evening, Mr Harris said an individual who let off a firework in the direction of gardaí during the disturbances would now be the subject of a criminal investigation and an investigating officer would be appointed.

Taoiseach Micheál Martin on Saturday evening condemned the demonstration “which posed an unacceptable risk to both the public and gardaí”.

Mr Varadkar said reporting of beliefs held by some of those who attended the protest indicated those beliefs were not far off conspiracy theories that have become prominent in US politics in recent years.

Asked about the role of social media in spreading or hosting misinformation, Mr Varadkar said that once an online safety commissioner is established – which is currently being worked on by Minister for Culture Catherine Martin – it would be possible to order companies to take down harmful content.

“I think there’s responsibility on some of the social media platforms as well to do the exact same,” he said. While many of the networks used to organise Saturday’s gathering were not regulated in Ireland, mainstream networks that allow themselves to be used as a vehicle to advertise illegal gatherings have a responsibility to prohibit such content.

He also said there was an “extreme populism” which needed to be pushed back on, which is also appearing in mainstream politics.

Emma Kelly may be allowed to leave hotel if she tests negative for Covid, High Court told