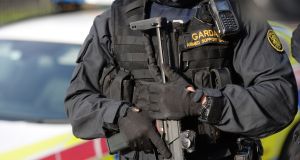 Among other reforms is the possible divestment of “non-core” activities away from An Garda Síochána. Photograph: Dara Mac Dónaill

A new high-level centre that will collate and analyse intelligence and assess the level of threats to State security is set to be established by the Cabinet today.

The Strategic Threat Analysis Centre will be headed up by a new National Security Co-ordinator, who will answer directly to the Department of the Taoiseach.

The proposal is one of more than 150 recommendations made by the Commission on the Future of Policing in Ireland, which are set to be accepted in full or in principle by the Cabinet.

The centre is expected to be accepted in principle, with some changes from what the commission initially proposed. However, Minister for Justice Charlie Flanagan will ask that the Government immediately move to establish the new body.

Some of the other reforms that will only be accepted “in principle” – and could require further analysis – include one of the commission’s major recommendations: the divestment of “non-core” activities away from An Garda Síochána.

“These include: courts security, prisoner escorts, immigration functions, prosecutions,” a memo from Mr Flanagan for today’s meeting says. “It is proposed to accept these recommendations in principle, subject to further evaluation on a case-by-case basis of their implications, including resource implications, how best they might be achieved and the timing of implementation.”

The Policing and Community Safety Bill is to be drafted as a “matter of priority” to replace the Garda Síochána Act of 2005. The new legislation will be the vehicle for implementing many of the reforms.

The Commission on the Future of Policing issued its report in September and was tasked by the Government to consider policing at home and abroad. Its report was intended to become a blueprint for Garda reform for the next decade.

Mr Flanagan will ask that all 157 recommendations of the report be accepted, with 21 of those recommended in principle. He is expected to hold a press conference with Garda Commissioner Drew Harris after the Cabinet meeting.

Although the Commission’s report proposed that the centre be headed by a National Security Co-ordinator who would answer directly to the taoiseach of the day, this has been changed to a mooted government decision that he or she would answer to the secretary-general at the Department of the Taoiseach.

“The National Security Co-ordinator will have a strategic analytical role, not an operational/executive role,” the memo states. “The [centre] would have a small, permanent staff, supplemented by personnel from An Garda Síochána and the Defences Forces as well as officials seconded from relevant departments.”

The National Cyber Security Centre will remain in the Department of Communications but will be “integrally involved” in the new centre.

The Government accepts a recommendation that the number of oversight bodies for the Garda be reduced from its existing three – the Policing Authority, the Garda Inspectorate and the Garda Síochána Ombudsman Commission – to two.

A new Independent Office of the Police Ombudsman would supersede Gsoc. Further reforms include the appointment of a statutory, non-executive board for An Garda Síochána and changes to how members of the force are recruited.