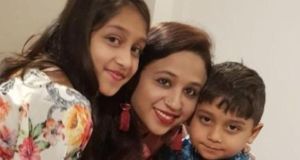 Gardaí have launched a murder investigation into the deaths of two children, who died along with their mother at their home in Ballinteer, south Dublin.

Arising from postmortems on the remains of Seema Banu (37), her daughter Asfira Riza (11) and son Faizan Syed (6), the Garda investigation into their deaths was officially upgraded to a murder inquiry on Friday, after the deaths had initially been treated as “unexplained”.

Gardaí now believe the children were strangled and their deaths are being investigated as murders. That same murder inquiry has also been applied to the death of their mother, Ms Banu, although the precise manner of her death has yet to be conclusively established.

A ligature was found with her remains in a bedroom of the family home in Llewellyn Court early last Wednesday afternoon. Gardaí believe the ligature was directly linked to Ms Banu’s death.

A statement from Garda Headquarters, Phoenix Park, Dublin, stopped short of referring to all three deaths as murders. Further examinations on Ms Banu’s remains are expected to be carried out.

“Following the completion of postmortem examinations, gardaí from Dundrum Garda station have commenced a murder investigation into all the circumstances of the events that occurred at a domestic dwelling at Llewellyn Court, Ballinteer,” the Garda statement said.

It added that the details of the postmortems, by Locum Assistant State Pathologist Dr Heidi Okkers, were not being released for operational reasons and that no arrests had been made.

“Gardaí are continuing to interview witnesses, conduct extensive door-to-door enquiries and gather and examine all relevant CCTV,” the Garda added. “Investigating gardaí continue to advise that some current uninformed speculation circulating in public is unhelpful to this criminal investigation.”

Ms Banu, who was from India, and her children were found dead at their home after neighbours had not seen them for a number of days and were unable to reach them at the house. Gardaí responded to calls from neighbours on Wednesday.

Just after midday, when gardaí forced their way into the house they found the remains of Ms Banu in one bedroom and those of her two children in another bedroom.

A tap had been left running at the house and had caused extensive flood damage. Gardaí believe the remains lay undiscovered for a number of days.

The family of Ms Banu said she was like the heart of the family.

He said Ms Banu, who was one of eight children, took most of the decisions for the family and took great care of everyone, and during the last video call they had with her last week, she had taken time to speak to several members of the family.

The family are appealing to the Irish Government to help pay for the repatriation of her remains and those of her children to India.