Scene at Assolas, Co Cork, is sealed off as gardaí examine farmhouse and field in wake of three deaths 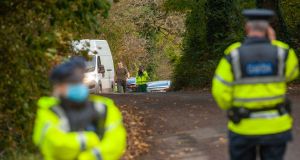 Gardaí at the scene of a triple shooting at Assolas, Co Cork. Photograph: Daragh Mc Sweeney/Provision

6.40am: Mark O’Sullivan is shot dead in his bedroom in the family home at Assolas between Castlemagner and Kanturk. Ann O’Sullivan flees the house and runs across the fields to a neighbour’s house to raise the alarm.

7am: Gardaí receive a 999 call that one man has been shot and may be dead with possibly up to two armed men barricading themselves into the O’Sullivan family home in a siege-like situation. Garda Press issues a statement requesting a media blackout on the incident.

7.25am: Uniformed and plainclothes officers arrive at the entrance to the O’Sullivan family home and speak to a neighbour who informs them he heard two shots sometime earlier.

7.30am: Gardaí declare the matter a critical firearms incident and establish a cordon 100 metres back from the house and an outer cordon over 1km on all approach roads to the farmhouse. An on-scene commander is appointed from Cork city division. A trained negotiator begins attempts to make contact anyone in the house and continues this through the morning without any success.

8.15am: Members of the Armed Support Unit (ASU) from Cork city arrive at the scene and take up position in the inner cordon as the trained negotiator continues with his efforts to contact with anyone in the house.

9am: A team of paramedics from the HSE trained to treat gunshot wounds and equipped with protective ballistic equipment, including bullet-proof vests and helmets, are airlifted to near the scene by the Irish Coast Guard helicopter, Rescue 116 from Dublin, which lands at Castlemagner GAA pitch.

The team is ferried by minibus to the inner Garda cordon where they take up positions with the armed members of the ASU who are maintaining their position some 100 metres or so back from the property.

The paramedics are joined by consultants in emergency medicine Dr Jason Van Der Velde and Dr Adrian Murphy who travelled from Cork and are on standby in the event of a critical medical emergency.

Noon: Members of the Emergency Reponse Unit (ERU) arrive from Dublin on board an Air Corps helicopter and are brought to the inner cordon where they take up their positions with the local ASU and begin discussions with the on-scene commander.

1pm: After the negotiator fails to engage with anyone in the house, a decision is taken to enter the farmhouse with the ERU taking the lead followed by the ASU with the trained paramedics following in once the house is declared safe to enter

Members of the ERU enter the farmhouse supported by the ASU and discover the body of Mark O’Sullivan in a bedroom. He has suffered at least one gunshot wound and is pronounced dead by members of the medical team. No one else is found in the house.

Members of the ERU and ASU begin a search of the adjoining sheds and outhouses before moving out into a wider search of the fields immediately adjacent to the farmhouse.

1.40pm: The Garda Air Support helicopter, which had come from Dublin, begins an aerial sweep of the farm and equipped with infrared heat-seeking equipment locates the bodies of two men near a fairy fort some four fields from the house.

Members of the ERU and ASU approach the scene, and members of the medical team pronounce Tadgh (59) and Diarmuid O’Sullivan (23) dead. Two rifles are found beside them in the fields, and the critical firearms incident is stood down.

2pm: Gardaí begin a criminal investigation and request the services of the State Pathologist’s Office and expertise from the Garda Technical Bureau in Dublin – in particular experts from the ballistics section. Gardaí declare the farmhouse and field separate crime scenes

3.30pm: Garda Press Office issues a statement lifting the media blackout and confirming the discovery of the bodies of three men, the standing down of the critical firearms incident and the opening of a criminal investigation.

9pm: Bodies of all three deceased are removed from the scene and taken to Cork University Hospital where Dr Bolster was due to start the postmortems at 9.30am.

The scene at Assolas remains sealed off as Garda technical experts, including Garda ballistic experts, examine the farmhouse and the field.