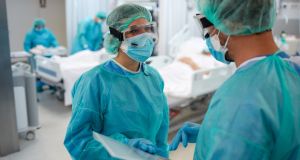 It is hoped the change in policy will help ease the pressure on the health service, which has faced manpower challenges. File photograph: iStock

Healthcare and other workers who have been infected with Covid-19 are to face less stringent self-isolation requirements once they recover as part of a bid to ease pressure on the health service.

Under a move approved by the National Public Health Emergency Team (Nphet), people who contract Covid-19 will in future be considered to be immune for six months, rather than the current three-month limit.

In future, anyone who has previously contracted the virus will not have to self-isolate if, up to six months after recovering, they are ruled a close contact of someone confirmed as having Covid-19.

It is hoped the change in policy would help ease the pressure on the health service, which has faced manpower challenges due to staff falling ill or having to self-isolate because they have been a close contact.

A spokeswoman for the Department of Health said the HSE is reviewing relevant policy in light of this recommendation from Nphet.

Separately, Minister for Health Stephen Donnelly on Friday night announced that international travellers from a further 13 countries will face mandatory hotel quarantine once the legislation and arrangements for the strict new Covid-19 measures are put in place.

An initial list of 20 countries including Brazil, South Africa, the United Arab Emirates, Austria and 16 sub-Saharan countries was drawn up earlier this month. Thirteen South and Central American countries have now been added to the list of so-called schedule two countries that present a higher risk of the virus and its variants.

Government officials are exploring the possibility that providers of mandatory quarantining would offer a “one-stop shop” of services including transport for arriving passengers, accommodation and meals, as well as providing security.

The Opposition has been highly critical of Mr Donnelly’s planned legislation, and it is to be debated in the Seanad on Monday as the Government continues its bid to get it passed and implemented “as soon as possible”.

Meanwhile, people arriving into the country are set to benefit from an expanded State testing regime, following advice from Nphet.

It is understood that it has recommended that those quarantining at home be offered a test through the public system after five days. A clear result would enable them to leave quarantine, as is currently the case, albeit they now have to arrange a private test themselves.

The advice – which is subject to operational capacity and feasibility – does not apply to those coming from schedule two countries, who will not be able to end their quarantine with a negative test. However, Nphet has advised they be given a test on arrival and a test on day 10, subject to capacity.

A further 29 Covid-19 deaths and 776 new cases were reported by the Health Protection Surveillance Centre on Friday.

Meanwhile, new figures reveal more than 400 people were referred to the Director of Public Prosecutions for failing to present a clear PCR test on arrival into the State between early January and mid-February.

A total of 408 referrals were made, according to figures released to Social Democrats co-leader Róisín Shortall, who said while compliance is improving, there needed to be “a better regime to ensure nobody boards a plane to Ireland without a negative test”.