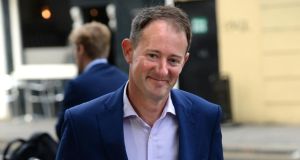 Labour justice spokesman Seán Sherlock expressed frustration at how long it took the gardaí to return an answer to his parliamentary question. Photograph: Dara Mac Dónaill

Money taken into evidence by gardaí went missing from stations on more than a dozen occasions over a three-year period.*

Between January 1st, 2015, and December 31st, 2017, 14 sums of money confiscated by gardaí as part of investigations disappeared from the evidence storage facilities of stations around the country.

Gardaí declined to release further details about the missing money, citing ongoing investigations. However, it is understood some of the missing sums came to light following internal audits.

Others were noticed when robbery and theft victims applied for the return of their stolen money after the completion of an investigation.

Most of the missing money was being stored pending court cases where it was to be used in evidence against a suspect. In such cases money cannot be lodged in a bank and must be stored securely in the Garda station to preserve the chain of evidence.

Details of the incidents were released to Labour justice spokesman Seán Sherlock last week after he asked the Department of Justice questions about confiscated money found to be “missing, stolen or lost” from Garda stations during the previous two years.

“I am now advised by the Garda authorities that there were 14 incidents between the 1 January 1st, 2015, and 31 December, 2017, where sums of money, confiscated money or evidence in a case were found to be missing or lost from a Garda station,” Minister for Justice Charlie Flanagan wrote.

“However due to ongoing investigations the Garda authorities have advised that they are not in a position to identify individual Garda stations.”

Last year, a man was arrested in relation to the theft of €12,000 from Kevin Street Garda station. The money, part of which had been confiscated from the Kinahan crime gang, went missing from a secure area of the station. The chief suspect was later released without charge.

“We look forward to the outcome of the investigations and hope they will become a matter of public record,” Mr Sherlock said on Friday.

He also expressed frustration at how long it took the gardaí to return an answer to his parliamentary question (PQ) which was submitted in October 2017.

“I submitted this PQ a year ago. It would be good if there was a clear impetus within the Gardaí to respond in a more timely fashion to members of the Dáil.”

A Garda spokesman told The Irish Times new bar-coding technology known as PEMS2 is being introduced to prevent money and other evidence going missing.

“As part of An Garda Síochána’s Modernisation and Renewal Programme 2016-2021, the PEMS (Property Exhibit Management System) and, in 2018, the PEMS2 system was developed to address some issues and deficiencies that arose in object management.

“PEMS will provide transparency, accuracy and greater efficiency in the management of objects in the custody of An Garda Síochána. PEMS2 will integrate with Pulse and supporting devices which facilitate the efficient transfer of objects in real time within the organisation from member to member, by the use of bar-coding on all objects.”