Noel Waters and ex-garda chief both have no recollection of 14 minute call, tribunal told 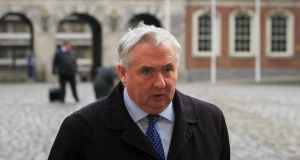 The former Garda commissioner Nóirín O’Sullivan phoned the then acting secretary general of the Department of Justice, Noel Waters, on May 15th, 2015, during the first day of hearings of the O’Higgins Commission, the Charleton Tribunal has heard.

The tribunal is investigating whether Ms O’Sullivan gave inappropriate instructions to her legal team in relation to the Garda whistleblower, Sgt Maurice McCabe, during the closed hearings of the commission, which examined allegations of malpractice in the Cavan-Monaghan garda division.

Last November the former minister for justice Frances Fitzgerald resigned as tánaiste during a controversy over what she knew about the instructions given by Ms O’Sullivan’s legal team at the commission hearings. Ms Fitzgerald’s resignation diffused a controversy that almost led to the Government’s collapse.

Mr Waters was phoned during a row at the commission over what instructions Ms O’Sullivan had given her legal team in relation to questioning the motivation of Sgt McCabe in making complaints about certain policing matters.

When the hearings resumed, the legal team confirmed that its instructions were to question the motives of Sgt McCabe.

At the tribunal Mr Waters said that in his view it would have been “improper” for the department to have any involvement with the legal approach taken at the commission by Ms O’Sullivan’s legal team.

Sgt McCabe’s counsel, Micheal McDowell SC, said phone records showed that during the break at the commission hearings, Ms O’Sullivan made a phone call to Mr Waters’ mobile that lasted for more than 14 minutes.

Mr McDowell said that he must have been discussing with Ms O’Sullivan what was happening at the commission.

The tribunal has been shown a statement from Ms O’Sullivan in which she said she understood that the phone records showed she had contacted Mr Waters, but that she had no recollection of the conversation.

The tribunal has already heard that on May 15th, 2015, Ms O’Sullivan was also in contact with the assistant secretary at the Department of Justice, Ken O’Leary, about the dispute that had arisen at the commission.

The tribunal has heard that Ms O’Sullivan’s legal team had advised her that they would have to raise the issue of Sgt McCabe’s motivation at the hearings, because of allegations that had been made by him involving other members of the force.

Mr Waters said he was not aware at the time that Ms O’Sullivan had received assistance from public relations consultant Terry Prone in the preparation of a speech to be given by the then Garda commissioner.

Mr Waters said he took up the role of acting secretary general after the resignation Brian Purcell. When the then government advertised the position, he did not apply, and when the position was not filled he was asked to remain in the role. He was appointed secretary general in October 2016, and resigned in November of last year.