Give Me a Crash Course In: The Looming Election 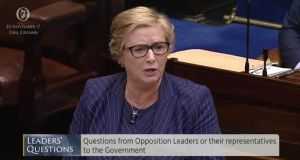 Even if Fitzgerald resigns, an election would be unavoidable in the medium term. Photograph: Press Association

How did the current political rift occur?

The Government is in crisis – Fianna Fáil has tabled a motion of no confidence in Tánaiste Frances Fitzgerald, Taoiseach Leo Varadkar has refused to remove her, and a general election looms.

The controversy has arisen out of an email sent to Fitzgerald while she was Minister for Justice on the issue of how Garda whistleblower Maurice McCabe was treated by counsel for former Garda Commissioner Noirín O’Sullivan at the O’Higgins Commission, which was investigating Garda misbehaviour.

However, the massive breach between Fianna Fáil and Fine Gael has been coming for some time. Fianna Fáil TDs, and the organisation at large, were not willing to give another concession to Fine Gael. The hardening of attitudes within Fianna Fáil followed a number of incidents, such as disputes over housing policy, the appointment of former Attorney General Máire Whelan to the Court of Appeal and, most seriously, the controversies surrounding Sgt McCabe last February. Fianna Fáil was not going to back down when another issue arose, as it has this week.

Bluntly, yes. A number of Fine Gael figures believed Micheál Martin would back down rather than risk an election on the issue of a motion of no confidence in Fitzgerald. However, Fianna Fáil was never likely to back down and many in that party believed Fine Gael would allow Fitzgerald to resign. So we are at this juncture now.

Even if Frances Fitzgerald were to resign, could the Government last?

In the short term, yes, but the damage done to the relationship between Fianna Fáil and Fine Gael is now irreparable. So even if Fitzgerald were to offer her resignation – and if it were accepted by Varadkar – the Government would stumble on for a few weeks or months, but an election would still be unavoidable.

What happens legislation that is currently before the Dáil and Seanad?

The Finance Bill, which gives effect to the tax changes in the Budget, has passed through the Dáil but not through the Seanad. The Seanad can sit after the Dáil has been dissolved, but the Social Welfare Bill has yet to pass the Dáil. If the Dáil is dissolved, that legislation will fall. Committees, such as that examining the Eighth Amendment to the Constitution, will also fall.

How can an election be called?

The Constitution says the Dáil can be “summoned and dissolved” by President Michael D Higgins on the advice of Taoiseach Leo Varadkar. The President can also refuse to dissolve the Dáil if the Taoiseach has lost the confidence of the House, although this has never been done. It is also thought the President can do that only if there is a prospect of another government, with a Dáil majority, being formed without an election.

When does an election have to take place?

The Constitution states that once the Dáil is dissolved, a general election must be held within 30 days. The Minister for Housing, Planning and Local Government appoints the polling day, which must be between the 18th and 25th day – excluding Sundays and public holidays – after the issue of the writ.