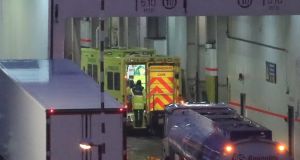 Emergency personnel at Rosslare Europort board a ferry after 16 people were discovered in a sealed trailer on Thursday, November 21st: nine have gone missing. Photograph: Niall Carson/PA

News that most of the migrants found in a truck’s trailer on a Cherbourg-Rosslare ferry last Thursday are missing will come as no surprise to many gardaí working in the immigration sector.

At any point from the time they apply for international protection to being threatened with deportation when their applications are rejected, migrants can simply leave the country or disappear within Ireland.

No exit checks are carried out at Irish ports, airports or along the Border with the North. That means it is impossible to determine if migrants who effectively go missing from the international protection, or asylum, system have left the State or remain here.

According to figures from the Department of Justice, between 2011 and October, 2018, some 9,197 deportation orders were made and 1,857 resulted in deportation.

It means during that period there were 7,340 people in respect of whom deportation orders were made but who were not deported. The Irish authorities have no way of knowing where any of those people – 80 per cent of the total number earmarked for deportation – are and if they left the Republic or remained here after learning they were to be deported.

Those figures do not include people who disappear from the international protection system before deportation orders are issued against them.

Within hours of the 15 Kurdish men and one juvenile being discovered on the Rosslare-bound ferry last Thursday morning, gardaí learned the group believed it was on the way to its intended destination of Britain.

Garda sources said it was very likely the nine men who are now missing from the reception centre they were sent to in Dublin had left in a bid to resume their efforts to get to Britain.

This, sources said, may involve stowing away on trucks being taken to Britain on a car ferry from Dublin or Northern Ireland, or even attempting to make the journey as foot passengers. The men could also travel to the North and seek asylum there in the hope of eventually being granted status and moving to Britain.

The men were not obliged to stay in the reception centre in which they were being accommodated in Dublin as part of the direct provision system. The accommodation, and meals at the centres, are offered as a service to those who have applied for international protection. Migrants can also stay with family or friends in Ireland while awaiting a decision.

Indeed, while the whereabouts of the men is now unknown, by disappearing from the centre they have broken no laws or even any rules of the international protection system.

Their applications for protection could still proceed if they attended future appointments relating to their cases. In reality, if the authorities were unable to contact them, even through an intermediary, making arrangements to further their applications would be impossible.

Garda sources said while they may be detected trying to leave the country as stowaways or on arrival in Britain or the North, it would not be usual for the Irish authorities to never have any further knowledge of them again.