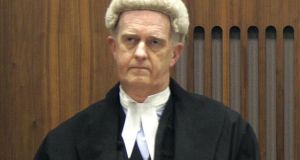 “After a good dinner one can forgive anybody, even one’s own relatives.” So reads the Oscar Wilde quote that opens a document instructing legal staff on the dietary preferences of Supreme Court Justice Peter Charleton.

The list, thought to be compiled by a member of the judge’s staff called a judicial assistant, offers a brief glimpse into the punctilious life of the staff who work for the State’s great legal minds.

In a two-page excerpt of the section entitled “getting food”, the judicial assistant recommends there are certain staples “that you’ll want to familiarise yourself with, as you’ll be buying these very often”.

According to the document, Mr Justice Charleton, who chaired the first phase of the Disclosures Tribunal and has sat on the Supreme Court since 2014, likes particular fruit.

“Judge Charleton is very specific that he only wants English Eating Apples. This means only certain varieties will do. The most commonly available ones in Marks and Spencer are Cox’s and Braeburn, so if you can get one of these two do so.”

The reader is also told of the specific importance of obtaining a certain brand of oatcake. “You really want to get the thin Orkney oatcakes, specifically, nothing else will do. They only sell these in Fallon and Byrne on Wicklow Street, so make a trip up there about once a month and buy about 7 or 8 packs of them.”

Prawn cocktails from Marks & Spencer are a staple, although “occasionally, the judge will prefer sushi”.

Medjool dates and stuffed olives – but not the chili-stuffed variety, only basil and garlic – are also to be sourced from that supermarket. A six pack of San Pellegrino, which the judge drinks at lunch, can be sourced from Tesco, although “it is handy to have a lot in reserve so you don’t have to buy it too often”.

The document provides helpful and close instruction on how to prepare smoked mackerel, another staple.

“Skinning the mackerel,” the section begins; “this is a difficult one.

“The mackerel that you’ll buy in Marks and Spencer cannot be served as is, but must have its skin removed. Use a flat bladed knife to peel the skin and once you have enough of it prised off from the main part of the fish, you can pull the rest off with your fingers.”

It continues: “Obviously you should remember to wash your hands. Be careful with the skinning, the mackerel itself can come apart if you go at it too eagerly.”

There are equally precise instructions for the sourcing and making of coffee. Kenyan coffee from Marks & Spencer is deemed acceptable, “but if you want to do this part right you should drop down to Brother Hubbard on Capel Street and get some because it’s delicious. They even grind the beans for you in the store.”

When guests arrive for coffee, it is served “on the little multicoloured cups and saucers with a spoon on the side. The cream is to be put in the pouring cow (don’t worry, I will show you the pouring cow)”.

Some instructions are more prosaic, for example on biscuits. “Hobnobs: Buy Hobnobs”, the reader is instructed, and “Lettuce: Get a pack of lettuce”.

Sources believe the document was likely written not by the judge himself, but by a judicial assistant for a second assistant who was taking over their duties. Any food would have been purchased by the judge at his own expense.

The judicial assistant system was introduced to replace the older usher, or tipstaff, system during the recession. Tipstaff were generally retired soldiers or gardaí who, in addition to getting the judge’s lunch and acting as their driver, announced “all rise” when the judge entered court. They also had a semi-official protective role for judges, with ushers of superior courts carrying a large wooden staff.

After the system was reformed, tipstaff were no longer assigned to newly appointed judges, who were instead assigned judicial assistants, who are expected to help judges in their legal research.

A 2016 review of the judicial assistant programme, which was authored by Mr Justice Charleton, found that some judges were critical of the quality of their assistants and are seeking the return of the old usher system.

Some judges were unhappy with the level of assistance and the qualifications of assistants. Candidates applying for the role with the Courts Service must have at least a 2.1 degree in law or a professional law qualification, as well as an understanding of the courts system, and some experience conducting legal research.

The Supreme Court did not respond to a request for comment.