‘I’m literally shaking,’ man tells judge, as he thanks him 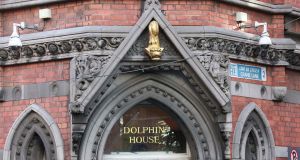 Emergency applications are continuing to be heard at the court at Dolphin House daily. Photograph: Stephen Collins/ Collins

A man has secured a protection order against his partner after he told a court she had run at him with a blade.

The man told Dublin District Family Court on Tuesday that he and his partner have a number of children together.

In a sworn statement to the court, the man said there was an incident at their home last week, where the woman “ran at me with a blade” and that he was “up against the wall”.

The man, who was only present in court, said the woman was “rubbing the blade against my chin and didn’t stop until I was crying”.

The man said, “This is the third time she has pulled a knife on me.” He said his partner was now living elsewhere with their children.

Judge Gerard Furlong granted the man a protection order on an ex-parte (one side only represented) basis against the woman, which prohibits her from using or threatening to use violence.

The man thanked the judge and said, “I’m literally shaking.” A full hearing, which the woman is expected to attend, was set for a later date.

Separately, a woman secured an interim barring order against her husband after she told the court he punched her in the face and threatened to kill her on Bank Holiday Monday.

The woman told the court on Tuesday she hadn’t slept all night and that her husband had been drinking every week and was “mentally abusing” her.

In a sworn statement to the court, the woman said every time her husband drinks he “gets abusive”. The woman said her husband was drinking from 10am on Monday and she and her daughter were also at the family home having tea.

The woman said her husband locked the sitting room door, took the key and went upstairs. The woman said she and her daughter asked the man to give them the key but he refused and was “screaming like a lunatic and punching the wardrobes”.

“He reached out and punched me in the face,” the woman told the court. She said her husband also said “he was going to kill me”.

The woman said her husband physically assaulted her in the past and that she had previously secured barring and safety orders against him, dating back to the 1990s.

“He’s very abusive when he drinks. It’s the alcohol, it’s every weekend, he’s mentally abusing me every week,” she said.

The woman said her husband called her and her daughter “really disgusting names” and threatens them. The woman said she didn’t call the guards on this occasion as she was afraid and was “trying to keep the peace”.

The woman said she was feeling dizzy on Tuesday and that she might go to the doctor.

Judge Furlong said given there was a history of domestic violence and an alleged threat to kill, he would grant the woman an interim barring order. The order excludes the man from the family home for eight days and from carrying out any further violence or threats of violence, and from watching or being near the home.

A full hearing, which the woman’s husband is expected to attend, was set for next week.

Grandson Separately, a woman secured a protection order on an ex-parte basis against her grandson.

In a sworn statement to the court, the woman said her grandson lived with her and that he got annoyed when she cleaned some of his tobacco off a table.

The woman said her grandson started calling her names, punched a wall and “threatened to punch the head off me”.

“I am afraid of him. I don’t think he would hit me but I don’t know. If he does drugs, I don’t know how he will be,” the woman said.

Judge Furlong granted the woman a protection order and set a full hearing, which the man is expected to attend, for a later date.

Emergency applications are continuing to be heard at the court at Dolphin House daily.