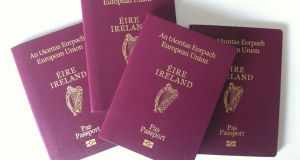 Citizenship and an Irish passport were granted to a man pretending to be a Kosovo national.

An Albanian man in his 40s has been sentenced to three years in jail, with 18 months suspended, for making a false declaration in a successful application for Irish citizenship.

In the first such conviction of its type, the man, who pleaded guilty, was sentenced at a hearing in Longford Circuit Court on Friday, according to the statement issued by the Garda Press Office. It did not give the man’s name or address.

The man entered the State in 2001 using the alias of a national of Kosovo, and sought asylum under a false name. He was granted temporary permission to remain in the State in 2007, the statement said.

He made an application for citizenship which was granted in 2014, with citizenship and an Irish passport all being granted to the man under the pretence of his being a national of Kosovo, the statement said.

The conviction followed an investigation by the Garda National Immigration Bureau, with assistance from the Passport Office, the Immigration Service Delivery, the Irish Citizenship Department, and gardaí based in Castlepollard and Mullingar, Co Westmeath, the statement said.