Man from Carrigaline dies after being found in public toilet

Married man was out socialising in Cork with family members 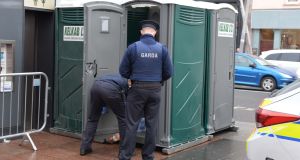 Gardaí at the scene on Grand Parade, Cork. Photograph: Provision

Gardaí in Cork have begun an investigation following the death of a 42-year-old man who was found in an unresponsive state in a public toilet in the city centre early this morning.

The man, who was married and living in Carrigaline, was found in the public toilets on the Grand Parade in the city centre at around 1am.

The emergency services were alerted and the man was rushed by ambulance to the Mercy University Hospital but was pronounced dead a short time later.

The man had no obvious signs of injury or any obvious cause of death but gardaí cordoned off the toilet area for a forensic examination by Garda technical experts.

A Garda spokesman said that they hope that a post-mortem examination later today at Cork University Hospital will establish how exactly the man died.

It’s understood that the man was out in Cork socialising with family members and it was they who raised the alarm when he failed to emerge from the public toilets.