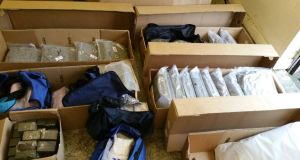 Packages of drugs which were seized by gardaí in Dublin on Wednesday. Photograph: Garda/Facebook

Two men have been remanded in custody charged in connection with a €2.8m drug seizure in Dublin .

Two cars were stopped in Drumcondra and searches revealed some 5kg of cannabis. In a follow-up operation, drugs worth in excess of €2.8 million were seized, including cocaine, heroin, cannabis, ecstasy tablets and drug packaging and mixing paraphernalia.

Father-of-one Leroy Howard (25), appeared before Judge Bryan Smyth at Dublin District Court on Thursday afternoon charged with possessing cannabis for sale or supply after a car was stopped at St Joseph’s Avenue, Drumcondra on December 20th.

He was refused bail following a hearing in which the court heard that this to be his first Christmas as a father.

Objecting to bail citing the seriousness of the offence, Det Garda Redmond O’Leary told the court that Mr Howard was caught red-handed following covert surveillance. He alleged that a Ford Focus driven by Mr Howard pulled up in front of a black taxi.

The driver of the taxi got out and was allegedly approached by Mr Howard. It was alleged he was handed a two large white bags which he placed on the rear seat of the Ford Focus.

It was alleged Mr Howard drove away along on St Joseph’s Drive in the direction of St Alphonsus Road where he was stopped.

Five kilos of suspected cannabis and a quantity of white powder - believed to be a controlled drug - were recovered, the court heard. The value of the cannabis was €100,000 and the charge before the court carried a five-year sentence.

Det Garda O’Leary agreed with defence solicitor Amanda Connolly that the accused has strong family ties and was rooted in his community. The garda accepted that this alleviated one concern in relation to the Mr Howard being a flight risk.

The solicitor also said that Mr Howard and his partner have an eight-month old baby and a second child due in March. He also agreed that it was accepted that Mr Howard was “low down on the scale”.

The family had raised €7,000 for bail and the garda accepted that this was a large amount of money for them.

The defence solicitor said her client, who did not address the court, would surrender his passport and would abide by bail terms. She said that this was his “first Christmas as a father and it is weighing heavily on his mind”.

However, Judge Smyth refused bail and remanded him in custody to appear on December 26th.

Co-accused Michael Smullen (33), from Oak Park Avenue, Santry, Dublin was charged with having cannabis, cocaine and heroin for sale or supply at a building on St Columba’s Road  in Drumcondra and having cannabis for supply at St Joseph’s Road on December 20th.

He made no application for bail when he appeared before a late sitting of Dublin District Court on Thursday evening. Det Garda Patrick Hearne said the man had no reply when charged. Judge Gerard Jones remanded him in custody to appear again on December 27th.