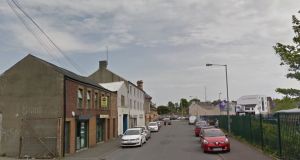 In a search at a business in the Charles Street area (general view above) of Lurgan, psychoactive substances worth an estimated £400,000 were seized along with tablets and two industrial tablet presses. File photograph: Google Street View

In one of the largest ever discoveries in Northern Ireland, officers found the drugs at a house in Portadown and a business premises in Lurgan over the course of two days.

The PSNI said the home was raided on Tuesday after a barrel containing a large quantity of suspected new psychoactive substances was intercepted by its Organised Crime Unit and Border Force.

It had been due to be delivered to the house in Portadown.

A 35-year-old man arrested at the property on suspicion of a number of drugs offences was released on bail pending further police enquiries, the PSNI said.

A number of items and unknown substances seized in the house were undergoing further examination.

In the second search, at a business in the Charles Street area of Lurgan, psychoactive substances worth an estimated £400,000 were seized along with tablets and two industrial tablet presses.

Det Insp Pete Mullan said: “We will continue with proactive investigations and enforcement work, but the drugs problem cannot be solved by police alone.

“We want to ensure that we are doing everything possible to prevent the supply of drugs and arrest those involved, while at the same time making people aware of the real dangers they pose to their health and their lives if they take illegal or controlled drugs.

“The profit made from the supply of illegal drugs funds organised crime, which brings harm to individuals and destroys communities.

“I would encourage people to think before they buy.” – Press Association