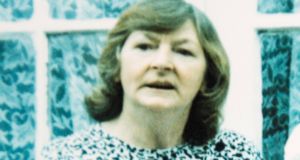 Rosie Hanrahan who was found dead at her home at New Road, Thomondgate. Photograph: Liam Burke/Press 22

A garda technical examination of the home of a 78-year-old Limerick woman, who was found murdered in her terraced bungalow last week, was completed on Wednesday.

The forensic sweep of Rosie Hanrahan’s house for clues as to the identity of her killer or killers was conducted over the past six days by specially trained gardaí, including a DNA expert.

Gardaí have urged anyone in fear in the community, particularly the elderly or those who are immobile, to acquire personal safety alarms as the hunt for the perpetrator or perpetrators continues.

The alarm pendants or brackets can be acquired free of charge by over 65s via the Pobal website, gardaí said.

Meanwhile funeral arrangements for Ms Hanrahan from New Road, Thomondgate, have been confirmed. She will be reposing at Griffin’s Funeral Home, John’s Gate, Penneywell, from 5pm on Friday, with removal at 6.30pm to St Munchin’s Church, Clancy’s Strand.

Her funeral mass will take place at 11.30am on Saturday.

Ms Hanrahan was predeceased by her husband Michael and is survived by her sisters Evelyn, Helen, Kathleen, and Chrissie.

“She was very active in her community, she was always upbeat and positive. She was a lovely lady,” he said.

“She came to mass at St Munchin’s Church every Saturday. She always sat in the same place on the side aisle of the chapel. She found great solace and comfort and support from attending mass,” he added.

Fr McNamara described the effect of the murder on the community as “horrendous”.

“There is a lot of anxiety and fear in the community, and particularly on New Road, Thomondgate, where there are a lot of people living on their own,” he said.

Friend and neighbours have continued to add personal messages to a growing shrine of floral tributes and candles left outside Ms Hanrahan’s home.

One tribute read simply: “Rose, sleep peacefully, from all at Num 34.”

Another, which appeared next to a single red rose, read: “Rest in peace, Limerick Lady Rose.”