Heroin and crack cocaine worth €300,000 seized in Dublin 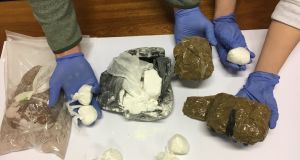 Heroin, cocaine and crack cocaine worth an estimated €300,000 have been seized in Dublin 8.

Heroin, cocaine and crack cocaine worth an estimated €300,000 have been seized by gardaí in central Dublin.

The drugs were found when officers raided an apartment at Whitefriar Gardens in Dublin 8 at 9pm on Wednesday.

“During the search heroin and mixing agent were discovered with a potential street value of €250,000 along with cocaine and crack cocaine with a street value of €50,000,”a garda spokesman said.

A 56-year-old man was arrested at the scene and is being held at Kevin Street Garda station under section 2 of the Criminal Justice Drug Trafficking Act, 1996.

The arrest was made as part of Operation Thistle, which is targeting street level drug dealers linked to the Kinahan gang.