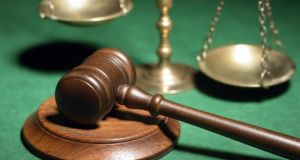 Court records show Paul Howard and Una McClean have initiated a number of High Court proceedings in recent years as lay litigants, including a case against Ulster Bank and a case against two solicitors

The owners of a Dublin apartment from which a group of young people are facing possible eviction own a number of properties in the city centre, land registry records show.

Paul Howard and Una McClean, Harold’s Cross, are owners of seven apartments at three different addresses on Mountjoy Square as well as an apartment on Talbot Street, Dublin 1, where Ms McClean formerly ran a creche called Little Tigers and there is now a launderette called Clean City Launderette.

Court records show the two have initiated a number of High Court proceedings in recent years as lay litigants, including a case against Ulster Bank and a case against two solicitors.

In 2014, Ms McClean, representing herself, initiated a case against Mr Howard in the High Court which involved the granting of a lis pendens, or registration of a person’s interest in a property. It is not known what property featured in the case.

In almost all instances, the High Court proceedings did not progress to hearings or the making of any final orders.

On Wednesday the Dublin Circuit Court heard an application from the Residential Tenancies Board (RTB) for an extension of an interim injunction granted at a late sitting of the High Court on Friday, December 15th, against Mr Howard in relation to an apartment on Mountjoy Square.

The tenants alleged their landlord sought a rent increase of more than twice the permissible 4 per cent in a designated rent pressure zone and tried to evict them when they objected.

Last Friday, they said, the landlord changed the locks and cut off electricity. Power was restored to the apartments the following day.

The extension to the injunction against Mr Howard entering the property was granted pending the appeal against the rent increase, notice to quit, and other matters, which is to be heard by the RTB in January.

Efforts to get a comment from Mr Howard were unsuccessful while Ms McClean said she knew nothing about any eviction notices and did not want to discuss the matter.

In an interview with the Sunday Business Post Mr Howard said the houses could have contributed as a “micro-solution” to the homelessness problem.

Described as a small builder, landlord and launderette owner in the article, Mr Howard was quoted as saying he was considering appealing the decision of An Bord Pleanála to uphold a Dublin City Council ruling denying him planning permission.

Court records show a case against An Bord Pleanála was lodged by Mr Howard in November of this year, but struck out after there was no appearance.

In a notice inside the apartment that is the subject of the RTB application, it is stated that “any implied right of access” to the property by people working for a council, debt collection agency or the Revenue Commissioners is removed and that any “transgression” of the notice will be dealt with under common law.