Man charged with murder of two women in Perth, Australia, 20 years ago

Ciara Glennon (27), of Irish parentage, in Ireland a short time before death 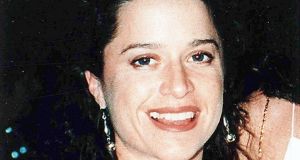 Ciara Glennon (27), whose body was found in a bush grave in Perth, Western Australia, in 1997. Police have charged a man with the abduction and murders 20 years ago of three women, including Ms Glennon. Photograph: Reuters

A man has been charged in Australia with the murder 20 years ago of two young women, including Ciara Glennon, who had Irish family connections.

Bradley Robert Edwards has been charged at Perth Magistrates Court with the abduction and murder of Ms Glennon (27) and Jane Rimmer (23).

Mr Edwards (48) is the former president of the Belmont Little Athletics Club in Perth. He was remanded in custody to appear again on January 11th next.

Ms Glennon was born in Zambia when her parents, Denis Glennon from Westport, Co Mayo, and Una Glennon from Monaghan, moved to Africa to take up teaching posts in the region. The family settled in Australia when Ms Glennon was five. She studied law and Japanese at the University of Western Australia in Perth and soon had a job with a local law firm.

The year before she died, she she took a career break to travel the world, during which time she visited Israel, Greece and Turkey and spent six weeks with family in Ireland. In late February 1997, she returned to Perth for the wedding of her sister Denise. She had returned to her old job and had been put in charge of a case that would have taken up most of the following two years.

On the evening of March 14th, 1997, she went for drinks with colleagues at the Continental Hotel in the upmarket Perth suburb of Claremont, a week before her sister’s wedding. At about midnight, she left the hotel to get a taxi home, 10 minutes away. Her partially clothed body was found under scrub by a passerby three weeks later.

Jane Rimmer, a childcare worker, disappeared after a night out with friends in 1996. Her body was discovered in bushland on August 3rd that year.

Perth teenager Sarah Spiers (18) also disappeared in Claremont in 1996. She was last seen leaving a venue on January 27th that year, and her body has never been recovered.

Mr Edwards has also been charged in relation to attacks on other women, including two counts of deprivation of liberty, two counts of aggravated sexual penetration without consent, one count of breaking and entering and one count of indecent assault.