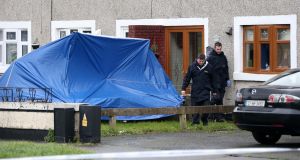 Gardaí at the scene of a shooting in the Ronanstown area of west Dublin. Photograph: Colin Keegan/Collins Dublin. 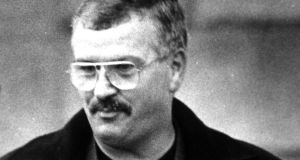 A file image of Noel Kirwan who was shot dead in Ronanstown in west Dublin on Thursday. Photograph: Collins. 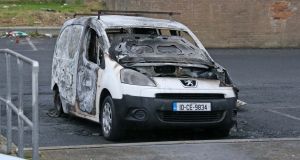 A burnt out car which garadí believe was used by those who carried out a fatal shooting in Ronanstown. Photograph: Colin Keegan/Collins Dublin.

Gardaí are appealing for witnesses to the latest killing linked to the Hutch-Kinahan gang feud in Dublin.

A close associate of Gerry “The Monk” Hutch was shot dead in front of his partner outside his home in west Dublin on Thursday.

Noel Kirwan was murdered in his car as he sat next to his partner at about 5.10pm in the St Ronan’s Drive estate in Ronanstown.

A man approached his car and fired a number of shots into the vehicle before making his getaway in a white Peugeot Partner van, registration 10CE9834, which was later found burned out. A gun was also discovered by gardaí.

“His partner was with him at the time of the shooting I understand. She is uninjured but obviously very distressed,” Supt Dermot Mann, of Lucan Garda station, said.

Kirwan, who was originally from Sean O’Casey Avenue in Dublin’s north inner city, had been known to the Garda when he was a younger man, but was not believe to be an active player in gangland crime in recent years.

Gardaí are exploring whether his relationship with the Hutch family, with whom he had grown up, was the motive for his murder.

“We can’t make any assumptions at this stage, but let me reassure the public and the community we will be putting a lot of resources into this to try and investigate it and move it forward,” .

If so, the attack would be the latest in a series of killings in the Kinahan-Hutch feud, a feature of which has been the targeting of friends of the Hutch family or members of the family who are not involved in organised crime.

One of these “soft targets” was Noel Duggan, a veteran cigarette smuggler who was killed outside his home in Co Meath in March.

Duggan was also sitting in his car outside his house when he was murdered.

Gardaí believe both Duggan and Kirwan were under surveillance and shot by gunmen who crept up to their vehicles before opening fire.

Mr Kirwan was linked to the Provisional IRA in Dublin for many years.

Gardaí will examine his historical republican background and his activity as a vigilante in the 1990s as part of the investigation into his killing.

In the 1990s, he claimed to be a community activist campaigning against drug-dealing in the north inner city.

However, after he got a firearm, allegedly in a bid to intimidate drug-dealers so they would stop operating in the area, he was arrested and brought before the courts.

He was charged with possessing an imitation firearm with intent to intimidate a person at Ballybough Road on September 17th, 1996.

The Garda was engaged in a very significant anti-gangland operation at the time, following the murder of journalist Veronica Guerin.

Mr Kirwan and his associates in the north inner city were also linked to a series of non-fatal assaults in the area at the time.

Gardaí said the most likely route taken by the getaway vehicle is turning from St Ronan’s Drive onto St Ronan’s Avenue and then up to the nearby junction with the Neilstown Road.

“That is a particularly busy junction and again remember this was 5pm in the afternoon, the volume of traffic was heavy,” Mr Mann said.

From there, the driver is thought to have turned right towards the nearby roundabout and driven into the car park at the back of the Neilstown shops, where it was set alight and abandoned.

Several shots were fired in the attack.

The scene of the shooting was closed off for technical examination and the State pathologist was called in.

Gardaí at Ronanstown Garda station have appealed for the public’s assistance in relation to the incident.

Anyone who may have information on the incident is asked to contact Clondalkin Garda station on 01-6667600, the Garda Confidential Line on 1800-666111 or any Garda station.

1 Covid-19 restriction-lifting may speed up if cases keep falling
2 Maureen Dowd: Trump has been wearing a mask for years
3 Archaeologists are ‘quite sure’ they have found Red Hugh O’Donnell’s burial place
4 Pricewatch: Left on the shelf - what we are no longer buying
5 Tax on Covid-19 payment could cause 'terrible shock' late in year
Real news has value SUBSCRIBE