Timeline: The 11 men killed in the Kinahan-Hutch feud 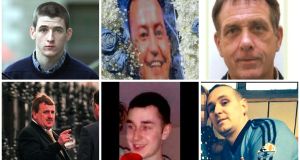 The murder of Noel Kirwan a brings to 11 the number of victims of the feud between the Hutch and Kinahan gangs since last September.

The victims, and the dates and locations of their killings, were:

Gary Hutch (34) was gunned down beside a swimming pool in a communal area of the Angel de Miraflores apartments complex, near Marbella on the Costa del Sol on the morning of Thursday, September 24th, 2015.

A drug dealer and armed robber, he was an associate of the Kinahan gang but they believed, apparently incorrectly, that he was a Garda informer and decided to kill him.

Instead the Hutch family would pay a six-figure sum to the Kinahan gang and Gary Hutch would agree to step away from the drugs trade. With this deal apparently in place, Hutch returned to Spain in 2015, having fled previously over fears for his safety.

But despite the negotiations the Hutches conducted with the Kinahan gang and the money paid to its members, Gary Hutch was still shot dead last September.

And when a group of armed men attacked a boxing event at the Regency Hotel in Dublin last February, they were believed to be associates of Gary Hutch’s seeking revenge against the gang that murdered him.

In May 2010, more than 30 suspected members of the Kinahan gang were arrested, many of them in Estepona, Marbella, Fuengirola and Mijas in Spain.

Gary Hutch was the sole suspect arrested in Ireland as part of the international inquiry into the gang, Operation Shovel.

Darren Kearns (34), had just left the Phoenix Chinese restaurant above Cumiskey’s pub on Blackhorse Avenue, close to the Cabra Gate of the Phoenix Park, at about 5.40pm on Wednesday, December 30th, when he was shot dead as his wife looked on.

Kearns was a convicted drug dealer who spent time in prison. It appears the Kinahan gang mistakenly believed he and David Douglas (54) were involved in a botched plan to shoot a member of the gang at a west Dublin pub last November.

Douglas was shot and wounded at his home in Cabra in November though he survived. However, he was targeted again last month (see below) and died from gunshot wounds.

David Byrne, a 34-year-old father-of-two from Crumlin, was a member of the international drugs gang led by Christy Kinahan. He was killed when he and a group of men aligned to that gang were attacked by five gunmen at a boxing tournament weigh-in at the Regency Hotel in Drumcondra, Dublin.

He had escaped serious conviction, despite being closely linked to organised crime for all of his adult life.

He was part of a new breed of criminal living between Dublin and Spain and conducting most of his criminality cross-border.

Byrne had been a target of every specialist Garda unit fighting organised crime since he was a teenager.

He was on the scene of the fatal stabbing of Declan Gavin in the early hours of Saturday, August 25th, 2001, outside an Abrakebabra outlet in his native Crumlin. When gang leader Brian Rattigan was put on trial for that killing, Byrne was called as a witness but said he saw nothing.

In 2008, while still in his mid-20s, Byrne was one of three men charged with the non-fatal shooting of another man in Ballyfermot, west Dublin. He was not convicted.

One of his co-accused was then-25-year-old Eugene Cullen of Sundale Villas, Tallaght. Cullen was later convicted of a gangland murder. He died in Portlaoise Prison last September.

Byrne was also suspected of involvement in the shooting dead of Gary Bryan (30) in September 2006. Bryan was sitting in the passenger seat of a car on Bunting Road in Crumlin when a man shot him a number of times at point- blank range.

Bryan, a suspected gangland killer, ran across the road to escape but the gunman shot him again. He was shot six times and died.

Byrne and a number of criminal associates close to him were seen by gardaí as managing some of the Kinahan gang’s affairs in Dublin, the main drug market it supplies.

He regularly organised parties in Dublin for members of the Kinahan gang, including when they had travelled from their base in Spain for boxing matches in Dublin.

Eddie Hutch snr had a number of convictions and his finances had been investigated by the Criminal Assets Bureau.

He was investigated in that regard as part of its inquiry into how his brother Gerry Hutch, also known as the Monk, laundered the proceeds of major armed robberies.

A bank account in Eddie Hutch snr’s name containing about €160,000 was found and the cash seized. However, gardaí do not believe he was involved in organised crime.

They believe he was shot dead simply because he was a member of the Hutch family.

It appears that after the late Gary Hutch’s associates launched the attack at the Regency Hotel that killed David Byrne, Byrne’s associates wanted to strike back at those who had been close to Gary Hutch and picked Eddie Hutch snr because he was a soft target.

Shot dead apparently because of his association with fellow veteran criminal Gerry Hutch, Noel Duggan was so heavily involved in cigarette smuggling he became known as Mr Kingsize.

Duggan (55), who was shot dead outside his home on a housing estate in Ratoath, Co Meath, was behind multiple shipments of counterfeit cigarettes. They were sourced from Asian and eastern European black market factories and smuggled into Ireland in 40ft containers as shipping freight.

While his cigarettes flooded the Irish market and earned him vast sums of money at the expense of the State in taxes and duties lost on regular products, Duggan was not regarded as a dangerous criminal.

He is not believed to have been involved in the drugs trade and while he lost his life in a gun attack, he had never been linked with gun crime or armed feuds.

He collaborated on some of his smuggling rackets with members of the Provisional IRA who assisted in the distribution of the smuggled cigarettes on both sides of the Border. The paramilitaries allowed Duggan to engage in his criminal enterprise in return for a stake in his transactions.

Garda sources said he was regarded as one of the last of a generation of so-called “ordinary decent criminals” who endeavoured to keep their public profile as low as possible in order to continue with their criminal activities.

Like some of his associates including Gerry Hutch he attempted to invest some of his wealth in property assets.

Martin O’Rourke, from George’s Hill, Dublin 7, was shot dead apparently in a case of mistaken identity. Gardaí believe the intended target was 34-year-old criminal Keith Murtagh, who is believed to have been closely associated with murdered gang figure Gary Hutch.

Mr O’Rourke may have been buying drugs when the killer struck. Up to six shots were fired before the killer escaped by bicycle.

The victim was hit in the head and died later in the Mater hospital. He had been standing outside Noctor’s pub when the killer arrived and he tried to run when he saw the gun.

This decision may have convinced the gunman he had the right target.

Mr O’Rourke, a 24-year-old father with a history of drug use, had slept rough in the past and more recently had been living in sheltered accommodation. He had no involvement in the feud.

His funeral Mass heard he was a young father who was attempting to turn his life around for the sake of his family. Parish priest of the Travelling people Fr Derek Farrell said O’Rourke was “an innocent man, a homeless man, a man doing his best to overcome personal adversity, a family man, a daddy, a fiancé, a young 24-year-old Traveller man”.

Murtagh is regarded as a key associate of Derek “Del Boy” Hutch, the brother of Gary Hutch and nephew of Eddie Hutch - both shot dead by the Kinahan gang as part of the feud.

Michael Barr (35) is believed to have been killed by Kinahan gang gunmen looking to shoot a Hutch family member in the pub at the time.

While Barr worked in the pub and was not the prime target, he was a dissident republican who was suspect of helping to source AK47s used in the Regency attack when David Byrne was killed in February.

Mr Barr had addresses in the Summerhill area in the past and also in Ballymun. He had been acquitted of terror-related charges when brought before the courts.

His home had been searched as part of the inquiry into the murder of Byrne.

Gareth Hutch died after being shot a number of times by two attackers in a carpark near his home.

He was a cousin of the late Gary Hutch and also the nephew of murdered taxi driver Eddie Hutch.

He is reported to have sought help in securing a new home just a day before his death because he feared he could be a target in the feud.

While he was well known to gardaí, he was not regarded as a major crime player.

He had been a member of an armed gang that tried to rob a cash-in-transit van bringing money to an ATM machine in a Co Dublin shop in 2009.

His brother Derek Hutch is serving lengthy sentences for a variety of crimes including manslaughter related to a fatal stabbing, armed robbery and a gangland murder attempt.

Convicted armed robber and drug dealer David Douglas (54) was shot dead outside the shop he ran with his wife on Bridgefoot Street, off Thomas St, in Dublin 8.

Douglas had been shot and wounded outside the home he shared with his wife and child on Killala Rd, Cabra West, last November.

Gardaí believe members of the Kinahan gang were behind that shooting, which was treated by gardaí as attempted murder.

One line of investigation is that the Kinahan gang wrongly believed Douglas and another drug dealer he had served a prison sentence with, Darren Kearns (33), were involved in a botched plan to shoot a member of the gang at a west Dublin pub last November.

Dublin City Council worker Trevor O’Neill was shot dead in Majorca on a family holiday with his wife and young children on August 17th after he was mistaken for a member of the Hutch family.

Originally from Drimnagh, he was not a gangland figure but was a friend of a member of the Hutch family from Dublin.

Noel Kirwan, a close associate of Gerry “The Monk” Hutch, was shot dead in front of his partner outside his home in west Dublin.

He was originally from Sean O’Casey Avenue in Dublin’s north inner city and had been known to the Garda when he was a younger man, but was not believe to be an active player in gangland crime in recent years.
Gardaí are exploring whether his relationship with the Hutch family, with whom he had grown up, was the motive for his murder.