Man arrested in connection with murder of Lyra McKee released 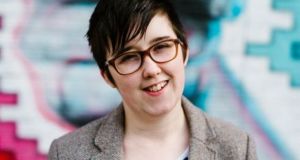 Lyra McKee (29) was shot dead by dissident republican group the New IRA while observing clashes with police in the Creggan area of the city on April 18th.

A man arrested in connection with the murder of journalist Lyra McKee has been released without charge, police in Northern Ireland said on Thursday night.

Ms McKee (29) was shot dead by dissident republican group the New IRA while observing clashes with police in the Creggan area of the city on April 18th.

The PSNI carried out searches at properties in the Northland Road and Creggan areas of Derry on Thursday morning.

A 46-year-old man was arrested under the Terrorism Act. A number of items were seized and taken for further examination.

In a statement, the PSNI said the suspect was taken to Musgrave Serious Crime Suite for questioning.

“Since Lyra was murdered following violent disorder in Creggan in Derry/Londonderry on 18th April, our investigation has received widespread support from the community,” Detective Superintendent Jason Murphy said.

“I still want to hear from anyone who has any information and would appeal to the public to contact my team of detectives on 101.”

He said witnesses who wished to remain anonymous could contact independent charity Crimestoppers and speak to them on 0800 555 111.