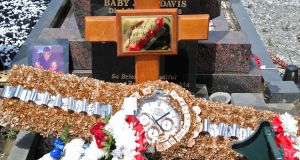 The grave of Jordan Davis in Fingal Cemetery, after his funeral in Darndale. Photograph: Colin Keegan, Collins Dublin 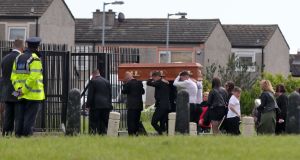 The remains of Jordan Davis are carried into the Church of Our Lady Immaculate, Darndale. Photograph: Colin Keegan/Collins Dublin 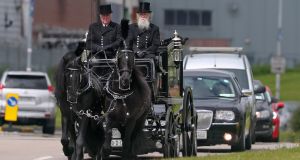 The remains of Jordan Davis are brought to to the Church of Our Lady Immaculate, Darndale. Photograph: Colin Keegan/Collins Dublin

Young people who deal drugs are slaves to their lifestyles, which are based on “the stench of death”, a priest at the funeral of murder victim Jordan Davis has said.

Fr Leo Philomin was addressing mourners who had gathered in Darndale, Dublin, for funeral of Davis (22), who was shot dead two weeks ago while wheeling his son (four months) in a push chair.

The priest said Davis was a young man who lived a life that was filled with anxiety and self-doubt. His life choices, he said, led him “literally into a dead end”.

Addressing the congregation at the Church of Our Lady Immaculate, Fr Philomin said: “There is an evil that destroys lives, relationships and homes; drugs.

“Drug trafficking and all that goes with isn’t glamorous. We don’t need to look further than why we are here. Just look around.

“I see a mother grieving. I see friends weeping. I see a young mother who one day will have to tell her son, how his father lived, how he loved to be with him, and how he died,” he said.

“Drugs don’t make you king. Drugs make you into a corpse. And those who sell and buy and sell again are the gravediggers with the stench of death.”

The priest urged the young people present not to allow their sense of right and wrong to be “dulled”. Instead, they could make choices that brought them more in life, he said.

Fr Philomin said Davis had been “brought into this world” by God, though it was a life of chaos and stress; spent in the shadows and with many twists and turns.

“Newspapers describe a man who lived the highlife,” he said, adding the reality was very different. “Jordan lived a life that was filled with anxiety and self-doubt.

“His outer bravado hid deep down the insecurity and panic he often felt. But he wasn’t able to express it.

“So he overcame it by the stance he took in life - the hard man. Trouble followed him, and often he created his own troubles,” Fr Philomin said.

He added the circumstances of the dead man’s murder had been especially “horrifying”.

“This type of violence, deadly violence, has sadly become all too familiar to us and to this city,” he said.

“What makes it horrifying for all is that the killer had no regard or care for who was around or who else could have been hurt. There was a baby in a buggy and there was a mother with her child.”

Davis was shot in the head by a gunman on a bicycle in a laneway in Darndale on May 23rd. He was regarded as a low-level drug dealer and was one of four men to die in related gangland shootings in the city this year.

They were all linked to a Finglas-based gang of drug dealers from whom Davis, Parker and Little sourced drugs and for whom Sanambar worked as a gunman.