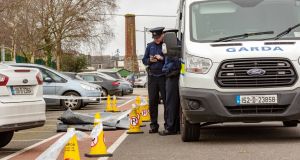 Black plastic and evidence bags protect a part of the crime scene in Sleaveen car park, Macroom, where a man in his 70’s, was seriously assaulted. Photograph: John Delea.

Gardaí have arrested a man in his early 30s for questioning following a serious assault on a 73 year old pensioner which has left him hospitalised with life threatening injuries.

The assault happened shortly after midnight when the victim, named locally as Christy O’Callaghan, was attacked and badly beaten as he was sleeping in a van at Sleaveen East in the centre of Macroom.

Mr O’Callaghan suffered a punctured lung as well as injuries to his head and body and was rushed by ambulance to Cork University Hospital where he is now in a serious but stable condition.

The alarm was raised by a passer-by and gardaí were quickly on the scene and arrested a suspect in the general vicinity. He was conveyed to Bandon Garda Station for questioning. He is being detained under Section 4 of the Criminal Justice Act which allows gardaí detain suspects for up to 24 hours before they are charged or released.

Gardaí are keeping an open mind on the motive for the attack including the possibility that the suspect targeted Mr O’Callaghan with a view towards robbing him of money he had with him.

Gardaí cordoned off the scene which is in a car park area near a local funeral home and garda technical experts have begun a forensic examination for DNA and other evidence.

Officers have also carried out door to door inquiries in the area and have begun harvesting CCTV security footage to see if it can assist them in their inquiries.