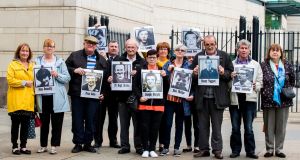 A former British soldier has been accused of “lying to protect soldiers” while giving evidence to an inquest.

The accusation came from barrister Karen Quinlivan, representing families of two men shot dead during a series of disputed shootings in the Ballymurphy area of west Belfast in 1971.

Ten people, including a priest, were killed in the shootings which took place across August 9th and 11th of that year.

Fresh inquests are taking place into their deaths at Belfast Coroner’s Court.

On Tuesday, the inquest heard from a former British soldier, who has been granted anonymity and is referred to as M68.

He was a 20-year-old private with the Queen’s Regiment serving in Belfast at the time of the shootings.

M68 made four arrests early on August 9th when internment was introduced in Northern Ireland.

Later, the inquest heard he was deployed to the Springmartin Road to reports of disorder at an interface.

He told the inquest that he did not see any soldiers firing their weapons and did not fire his own.

The inquest heard that a note taken by a Historical Enquiries Team (HET) investigator recorded M68 saying he had seen members of the Parachute Regiment arrive in the area and engage gunmen.

Cross-questioning the witness, Ms Quinlivan put it to M68: “You are basically lying to protect soldiers.”

Ms Quinlivan continued: “If you did not fire any rounds, you certainly saw people firing live rounds.”

Earlier M68 claimed he refused orders to place hoods over the heads of internees.

Internment without trial was introduced across Northern Ireland by the Stormont administration, and came into effect on August 9th, 1971.

M68 said that before being sent out to make arrests, he was told that prisoners should be hooded and tied or handcuffed.

He said he had arrested four people on a “hectic morning” on August 9th.

“I personally did not [place hoods over heads of internees],” he told the inquest, but other soldiers had.

Ms Quinlivan queried why he had been the “exception” by not hooding prisoners.

She put it to the witness that he was trying to distance himself from the practice.

He responded: “If I had of hooded a prisoner, I would have told you.”

Ms Quinlivan put it to the witness that he was “choosing not to help the families of Ballymurphy”.